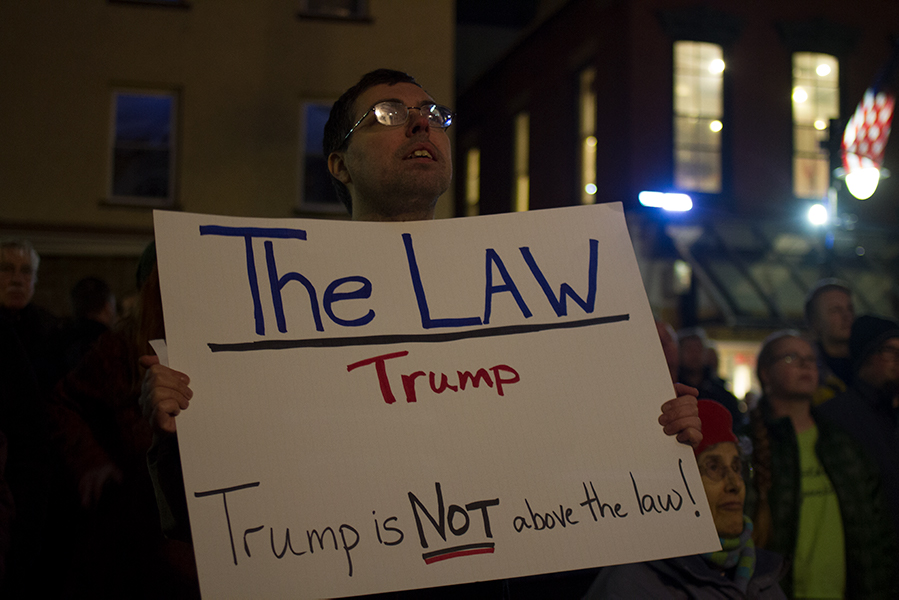 A protestor listens to Ryan McLaren, a staffer from Rep. Peter Welch's office, read a statement from Welch. "If this isn't worth standing for, what is?" said McLaren as he stood from his wheelchair.

Hundreds of people gathered in Burlington to protest the ousting of Attorney General Jeff Sessions as concerns over the future of the Trump-Russia investigation grow.

At least 400 hundred protestors marched Nov. 8 from the Federal Building on Elmwood Avenue to nearby City Hall to make their voices heard to President Donald Trump’s administration.

The protest, called “No One is Above the Law,” was one of 11 protests organized across the state and one of more than 900 protests staged across the U.S.

Jeanne Keller, one of the organizers and a Burlington resident, said she helped organize because of the Trump administration’s interference with the Trump-Russia investigation led by special counsel Robert Mueller.

“Trump is taking a significant step to obstruct justice,” Keller said. “I mean, this is equivalent to when Richard Nixon tried to cover up the Watergate scandal by firing the special counsel.”

The protest was planned by local Vermonters and Burlington residents but was part of a broader call to action from MoveOn, a progressive public policy advocacy group, according to the group’s website.

The investigation was meant to investigate the alleged ties between Trump and Russia during the 2016 presidential election.

The Action Team, the group of organizers responsible for the protest, was handing out their own handmade signs in the minutes before the expected 5:00 p.m. kick off.

Shortly after 5:00 p.m., the protesters began marching up Pearl Street with Burlington Police clearing the traffic ahead. The crowd turned right onto South Winooski Avenue before continuing onto College Street and eventually City Hall on Church Street.

As protestors gathered near City Hall, Marie Dunbar from Essex, Vermont stood on the opposite side of the street shouting at the protestors.

“I am against the protesting of Trump. He is a president who is more brilliant than the rest of us,” Dunbar said. “He knows what he’s doing and I believe there is a real good reason why Trump fired Sessions.”

Once in front of City Hall staffers from Sens. Bernie Sanders and Patrick Leahy as well as Rep. Peter Welch’s offices read statements from the congressmen.

Former Vermont Gov. Madeleine Kunin said in her speech if Trump is allowed to remove any critic, then our democracy is in trouble.

“Our job is to restore a balance of power,” Kunin said.

First-year Luke Fredrickson said he came to the rally because he wants a fair investigation.