Who are the SGA candidates? 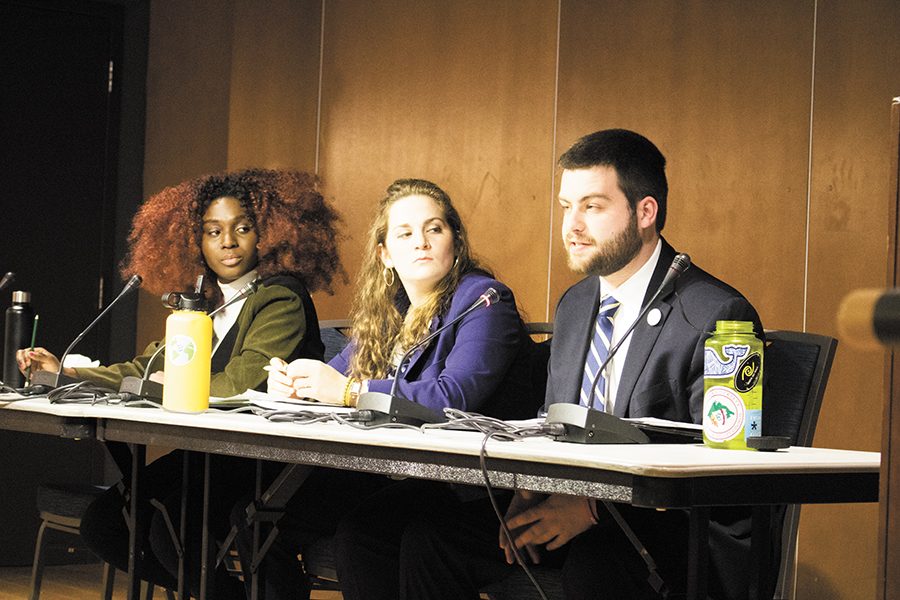 Studying English, American Sign Language and integrative health, Edosomwan was a leader on campus during the NoNames For Justice protests in February 2018.

Previously, she served as the president of the Black Student Union and has more recently served as a leader in NoNames.

Some of her goals include increasing identity center funding, implementing a place on campus to honor the Abenaki people, reinstating Arabic courses, working towards divestment from fossil fuels and updating the Sexual Harassment and Misconduct policy to require affirmative consent.

Edosomwan also plans to increase the number of campus victims advocates, increase liberal arts funding and create mental health days to prevent students from being penalized for missing class due to mental health.

NoNames put forward demands to have SGA increase the budget for student diversity groups  and change the name of the library, among other things.

Since the 2018 protests, several of NoNames’ goals have been met, including the renaming of the library to David Howe Memorial Library, removing Guy Bailey’s name for his connection to the eugenic movement.

A junior with a political science minor, Scannell served this academic year as the speaker of the SGA senate.

Scannell also served as a senator on SGA’s Committee on the Environment.

Some of her goals, if elected, include making housing more affordable, reducing the barriers to taking cross-college courses, implementing a morning off-campus bus, mandating social justice workshops for faculty and staff, as well as implementing the Safe Ride Home program. The Safe Ride Home program is an SGA initiative that would provide transportation for students to use to get back home at night safely.

If this program was implemented, students would be able to call a cab within a four-mile radius for a ride. The program would be paid for by an increased fee, estimated to come out to $1 per student per semester.

She is running along with sophomore Owen Doherty as her vice president.

The only vice presidential candidate and Jullian Scannell’s running-mate, Doherty is a political science major with a history minor.

Doherty’s campus involvement includes being an Advocat tour guide. Doherty also serves as the president of College Democrats and is vice president of community service for Pi Kappa Alpha.

Doherty currently serves on SGA as the chair of the public relations committee.

His platform, which is the same as his running mate’s, includes working towards affordable housing for students, making it easier to take cross-college courses, implementing a morning off-campus bus.

Other goals are increasing the number of campus victims advocates, working to make campus more just and sustainable and implementing the Safe Ride Home Program.

Safe Ride Home is an SGA initiative that would allow students to call a cab within a four-mile radius to get back to campus safely at night.

Regardless of who becomes president, Doherty will become vice president unless a write-in candidate gets more votes.