With the help of sticky notes, student overcomes nicotine addiction 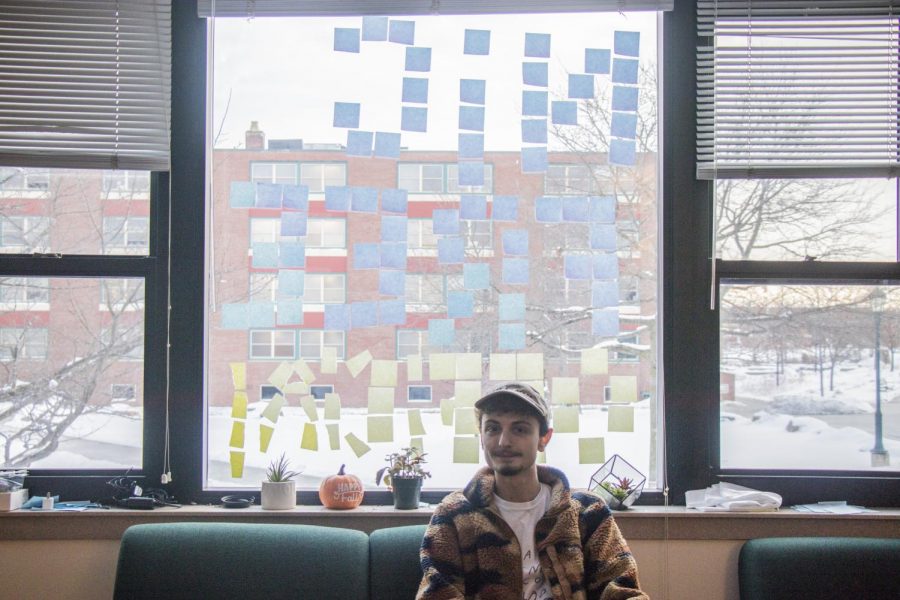 Sophomore Josh De Velis sits in front of his window of sticky notes that reads, “Nic Free Official,” Jan. 23. Ninety nine percent of tobacco users start smoking before the age of 26, according to the U.S. Surgeon General.

With the help of blue sticky notes on the window of his suite, a sophomore managed to quit his nicotine addiction.

The window of sophomore Josh De Velis’ Living/Learning Center suite displayed a tally of how many days he had gone without nicotine. His actions were intended to keep himself accountable in his seventh attempt to quit.

De Velis began using a Juul in high school and attributes his decision to start to peer pressure and the desire to be seen as “cool.” In college, he began smoking cigarettes while a first-year in McAuley Hall on Trinity campus.

The younger people are, the more likely they are to become addicted to nicotine. Ninety nine percent of tobacco users start smoking before the age of 26, according to the U.S. Surgeon General.

“I went home one weekend and saw a friend who’d quit,” De Velis said. “I went a weekend without it, and I made the decision to go one more day. After three days, I thought I could go longer. I hadn’t gone three days in almost two years.”

It can take a nicotine-dependent adult an average of 12 attempts to successfully quit electronic or traditional cigarettes, according to the U.S. Surgeon General.

“I think there’s a huge social component to smoking cigs,” De Velis said. “Cigs put me in fun social situations that I wish could exist without it.”

De Velis began trying to quit using nicotine in 2019 but was unsuccessful each time. After receiving a conduct violation while in McAuley, he became most determined to quit, he said.

“I got caught on my birthday by the police with 23 people in my room after a fire alarm went off and no-one in my room heard it,” he said. “I had to attend BASICS.”

BASICS is a program hosted by UVM’s Center for Health and Wellbeing. The program is designed to help students explore their alcohol and drug use in a supportive and non-shaming environment, according to the UVM website.

“It’s a harm reduction program to help students understand what they’re using and why they’re using it,” Grogan said. “There are health, social and economic costs to using substances.”

Dr. Prospero Gogo is an interventional cardiologist at UVM Medical Center. The patients he sees are generally 65 years or older, and many have been life-long smokers.

“The majority of them started smoking before 18 or 21,” Gogo said. “If you ask them why they did it, it’s because there was no perception of harm. Peer pressure and tobacco companies locked them in.”

A recent survey demonstrated that almost one in three Vermont high school students have tried a vaping product, according to a December 2019 article Gogo wrote for VTDigger.

De Velis said that he has switched between nicotine products in his time at UVM.

“You decide one is healthier than the other when you’ve been doing one for a while,” he said. “Ultimately though, I think smoking cigarettes is safer than Juuling.”

He attributes the high potency of Juul pods to be a factor in their danger, as well as the growing number of e-cigarette or vaping lung-related injuries (EVALI).

As of 2020, 2602 cases of EVALI have been reported to the Center for Disease Control; 57 deaths have been confirmed. All patients with EVALI have reported using vaping products, according to a January 2020 New England Journal of Medicine article.

“I see [the window] when I come back from the gym,” Resnick said. “I know other people who feel inspired to change their habits as a result.”

Beginning in February, there will be specific drop-in hours at Living Well for students who are considering walking away from nicotine.

Since quitting his nicotine habit and declaring himself “nic free,”  De Velis has plans for the future.

“I might join a team now that I can run again,” he said. “I’m a singer, and my voice got a lot better after quitting as well.”