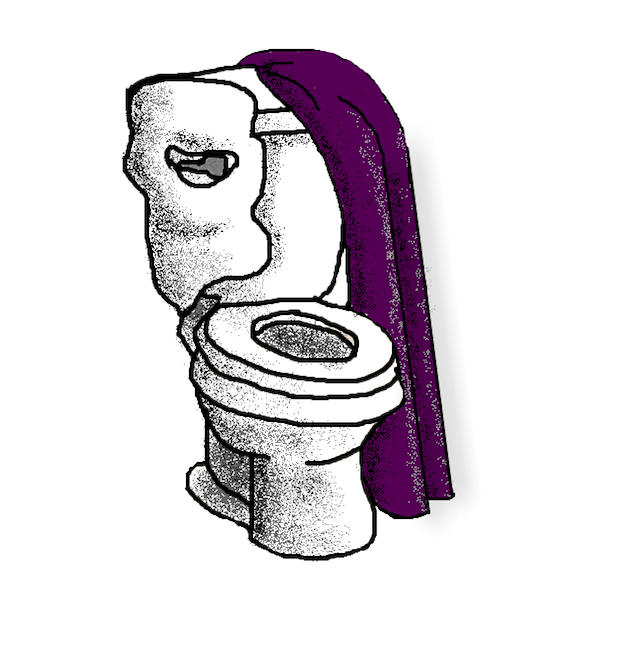 We’ve all been there, we all know the story: you’re in the Davis Center minding your own business and think you’ll take a bathroom break.

You sit, doing your business and contemplating life when suddenly your backside is splashed with a cold and violating spray of the toilet flushing despite you not being done. You sit in your humiliation and feelings of disgust.

You wonder what you have done wrong in your life to lead to this horrible moment. You want only escape.

If you play your cards right, you may get out with only one of these violating, premature flushes, but more likely, as you shift to grab the toilet paper, you’ll be struck again.

This is the hidden menace of our lives; the menace no one will talk about, but truly the largest threat to society in our lifetime. We simply cannot stand for this kind of degradation.

Every person at the University — nay in this world — deserves a dignified bathroom break where the toilet flushes when, and only when, it is supposed to. We must take a stand.

To fight this horror, we must go back to its roots. Toilets did not always automatically flush.

Back in the good old days, one could simply reach and pull a handle when one’s business was done and feel no stress about the matter.

But some people would leave the bathroom forgetting this crucial step.

Others felt unsanitary about touching the handle, even though they were washing their hands immediately afterwards. And thus, the automatic flush toilet was invented to relieve these problems. Ah, what a dark day it was.

Supporters of the monstrosity claim it is more sanitary and more efficient, that it saves water. These supporters are delusional. The sanitary claim can be debated, but there is no clear evidence for it. However the automatic flush toilet is anything but a water saver.

There is something called the “phantom flush” that plagues our nation. It refers to the horror of being flushed on while still sitting, but also to the toilet flushing when there is no one around.

Since the toilets operate on a motion sensor, sometimes they can be tripped off by something very slight and flush completely unnecessarily.

How wasteful. According to one estimate reported in the Guardian, bathroom water consumption can spike as much as 50 percent after installing automatic flush toilets.

Automatic flush toilets are not water savers. We must not give in to the false propaganda of their supporters, we must see through the lies.

We need a return to traditional flushing values and safety for the dignity of the children. So join me in the fight against this inappropriately-flushing plague and declare that the automatic flush toilet is the true public enemy number one.