As our climate worsens, so do our prisons 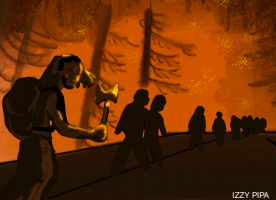 The world is red; it’s burning with smoke filling the nostrils of the strong men and women fighting against the enemy that is a flame.

There are embers flying and the air is filled with smoke and all that is visible is an orange color.

They work hard. It is sweaty, it is tiring, it is skilled labor; they do it for free.

Forest fires, specifically the megafires of the west coast, are worsening due to a warming climate which feedbacks into the corrupt prison system.

This leads to states looking for cheap fire-management, which comes mainly from prisons.

In California, the state is reliant upon the criminal justice system to fight the forest fires.

It is a system tied to behavior that comes from the prison-industrial-complex, a term coined by Angela Davis that describes the expansion of the prison system after the monetization of the industry.

It is a version of modern-day slavery that persists and will worsen with inaction against climate change.

Despite the job being deadly because they are exposed to noxious gas and high temperatures, prisoner firefighters only make $1 an hour, according to a September 2nd article by the Marshall Project.

No one should do life-threatening work for $1 an hour, even if they are imprisoned. It is exploitation.

These same men and women who fight forest fires are also often not allowed into the profession once their sentence is up due to laws surrounding background checks.

It is not rehabilitation if prisoners cannot use their new skills after laboring while incarcerated.

Incarcerated individuals are as human as those who have a clean slate and they are deserving of living wages and the ability to use skills gained in prison after they get out.

According to the NAACP, 1 out of every 3 black boys is sentenced to prison to every 1 out of 17 white boys.

This information can only create one conclusion: the racist criminal justice system is exploiting black bodies to save money.

Climate justice and social justice are linked, and this issue only showcases how climate change causes problems that perpetuate racist systems.

UVM and Burlington are a part of this problem.

Sodexo, the company that UVM hires to run its dining halls, has money in private prisons.

The branch of the company, Sodexo Justice Services, runs in several for-profit prisons throughout eight countries, according to the Sodexo website.

Some prisons they operate in have histories of violence, according to a January 2020 Cynic article.

As long as UVM has ties to companies that operate in private prisons, UVM will be linked to the prison-industrial complex.

Vermont is not reliant upon prison labor, but they do send prisoners to out-of-state for-profit prisons, according to a January 2019 VTDigger article.

We are not free from responsibility just because we live across the country.

As long as Vermont supports the capitalistic prison empire, even if adjacently, we are responsible for the slave labor systems running in other states.

When society puts profit above well-being, the quality of life eventually decreases; megafires and the prisoners used to stop them are the result of this.

We need to move the systems we live in away from the prison-industrial complex and away from fossil fuels in order to live in a just world.

The current system cannot sustain us. It must change.