Be consistent with your praise 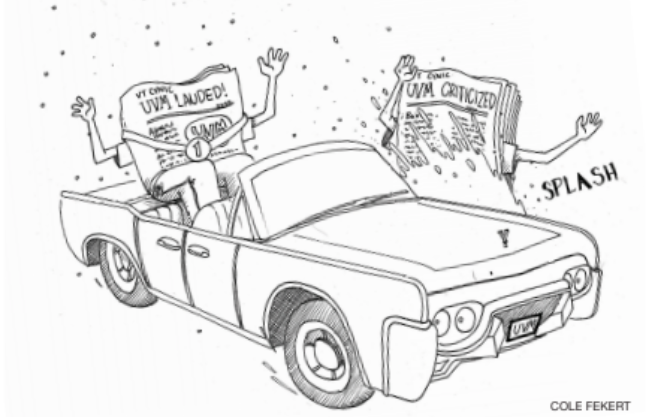 On Saturday, October 10, we wrote and published a story about Dr. Deborah Birx, the Response Coordinator of the White House Coronavirus Task Force, and her visit to UVM’s campus.

The doctor had some nice things to say about how the University has been handling the virus and returning to school while warning about future outbreaks and becoming complacent.

The article was largely positive.

Within the span of 24 hours, UVM administrators praised the Cynic for its good reporting.

“Good job covering the press conference, Alex and Sawyer!” tweeted UVM President Suresh Garimella with a link to the article.

“Just wanted to congratulate you on the excellent article you wrote for both the Cynic and the Digger on Dr. Birx’s visit. Really well done,” wrote Provost and Senior Vice President Patty Prelock in an email to Managing Editor Alek Fleury who wrote the article.

In reality, the article was…fine.

It was something we threw together in the span of three hours and to be completely honest, it doesn’t really set itself apart from any other breaking news story we’ve written this year or in past years.

The article was something that every single writer on the Cynic’s staff could pull together within the same time frame and involved zero real reporting. Just sitting there, watching a press conference and then, to the fault of none, being denied the opportunity to ask a question.

The only difference between this article and others was its subject matter.

We accept the praise of our articles from Garimella and Prelock and thank them for reading them and sharing them.

We find it odd however that when we publish articles pointing out real problems on UVM’s campus, some of which take us months, administrators are largely silent.

If there is anything that the Cynic is not, it is an ad for the administration.

There was no congratulatory email for writing about the strike of Davis Center employees when the Hispanic Heritage Month Flag was taken down.

There was no congratulatory email when we wrote about RA’s list of demands sent to the director of ResLife about hazard pay and more COVID-19 protections.

There was no congratulatory email for our coverage of the epic protests in Battery Park that students took part in.

There was no congratulatory email for reporting on custodial staff throwing up from heat exhaustion and students in emergency housing this summer spending the night outside because the heat in their building was turned on.

And this is not us asking for that. We know our reporting is solid and don’t need any positive affirmations.

We are simply asking that when administrators want to publicly point out excellent articles and good reporting, that they actually do so.