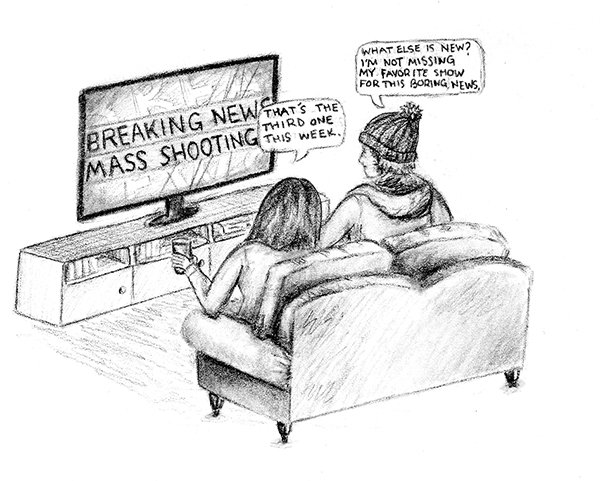 Wednesday, Feb. 14 constituted one of the top 10 deadliest shootings in American history, according to a Feb. 19 CNN article.

If you’re like me, you were devastated to read this news. It’s horrifying that so many lives continue to be taken in shootings like this.

But, if you’re also like me, you read the news, sadly reflected, put your phone away and had a normal Wednesday.

It’s hard to know how to navigate this world where any moment, any place, any person could be involved in the next mass shooting.

It’s hard to remember how many have happened.

This isn’t normal — except, it is now.

This isn’t meant to be a guilt trip, but a testament to reality.

I read the news, I feel sad and then numb and I go about my daily business. I think of it again when I see the flags at half-mast, but it takes me a minute to remember why they’re flying low.

The flags should permanently be at half-mast.

These shootings are so normalized that I cannot invest the amount of emotional energy they deserve. Like the rest of the nation forced into desensitization, I still have to live my life.

The shooting in Florida caught the news cycle, and the surviving students have been particularly vocal. They have been speaking out and organizing rallies, protests and walkouts, so maybe this one will stick.

Maybe continued attention will make an impact in preventing similar occurrences in the future.

But I doubt it.

The cycle will continue: discussions, protests, excuses made by lawmakers. Give it a few weeks and no one will be mentioning it anymore.

I realize how cynical and apathetic that sounds, but this is the truly frustrating state of our country.