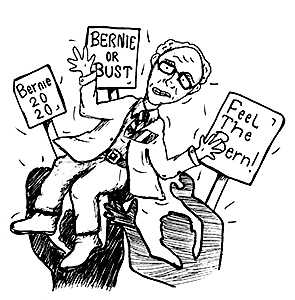 Political experts on the left sometimes argue that Sen. Bernie Sanders’ supporters could present a problem for the Democratic Party’s effort to defeat President Donald Trump in the presidential election. They are wrong.

Some notable criticisms have come from figures such as New York Times opinion columnist, Bret Stephens.

In a Jan. 30 New York Times opinion piece, Stephens stated, “no other Democratic candidate has so many venomous followers to return fire with fire…the only real analog in U.S. politics today to the Bernie nasties are the Trump nasties.”

Additionally, many worry that Sanders’ supporters cannot be relied upon to vote for the Democratic candidate if it’s not Sanders and may defect from the party and vote for Trump, or abstain from voting all together.

However, Sanders’ base is not an intolerable mob of predominantly white men as figures like Stephens seem to suggest,  but a diverse group of men and women with unique identities and a common passion for Sanders and his campaign’s message.

In fact, the Vermont senator’s supporters are in many ways more diverse than that of his Democratic competitors.

This lead is significant because one of Sanders’s weaknesses in 2016 was his inability to appeal to the Hispanic voting bloc.

His lead this time around suggests that Sanders is both more popular with this bloc than former Vice President Joe Biden is, who trails him 36% to 24%.

Moreover, this same study indicates that Sanders can appeal to more centrist voters, as the African-American and Hispanic Democrats are more likely to identify as moderate or conservative amongst the Democratic party.

This is important because the former voting bloc of African American voters were thought to favor Biden’s candidacy significantly.

Yet, Sanders led Biden in support from non-white voters by three percentage points according to a Feb. 8 CNN poll.

This matters because Biden was long thought to be the favorite amongst minority groups.

Finally, Democrats should not fear that Sanders supporters will defect from the party, nor should they fear that he is too left to gather strong support from the base.

While it is true that roughly 12% of Sanders supporters defected from the Democratic Party and voted for Trump according to a November 2017 Center for American Progress report, this criticism isn’t unique to his supporters.

In the 2008 presidential election, 15% of former Secretary of State Hillary Clinton’s  supporters defected from the Democratic party and voted for Sen. John McCain, and 13% of Trump’s 2016 voters also voted for former President Barack Obama in 2012 according to the same report.

While none of this guarantees that Sanders supporters will definitely vote for the Democratic candidate, it does show that concerns about his voters are not unique.

Democrats’ main concern should not be whether we can count on Sanders supporters to vote for the Democratic nominee.

It should be whether or not any candidate will excite enough voters to turn out to the ballot box and beat Trump in 2020.