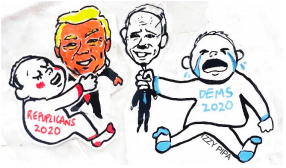 The night before the announcement of the presidential nominee is similar to the eve of a birthday.

You’ve spent all year making a list of demands, and hope your family bought you the right thing. Well, many Democrats are acting like they woke up to a box of socks when they’d asked for a new phone.

Joe Biden is our nominee and if I had a dollar for every “settle for Biden” tweet posted, I could buy his campaign.

I understand that he wasn’t the favorite candidate, but posting “settle for Biden” isn’t “fighting the system”. It’s undermining the Democratic campaign, while opening the door to the Oval Office and inviting Trump to stay.

Let’s return to 2016: Hillary vs Trump. 46.9% of Americans didn’t vote in 2016, because they couldn’t support either candidate, according to a 2016 Washington Post article.

The result: the Great Pumpkin owns our nuclear codes.

You’d think people wouldn’t want a repeat of that. But, once again I’m pleading with people to do the sensible thing and vote blue.

This year, the argument is more frustrating.

Trump crippled America. Our environment is near disaster. Immigration centers and penitentiaries look alike. Our international policy is the laughing stock of the world.

But people still sit behind their TV screens, watching the world collapse, and claim both men are similar evils.

That frustrates me. While Biden and Trump have similar histories with controversy, the comparison stops there.

Trump is an evil robber baron who grew up twisting arms and dealing money under the table.

He’s not a politician, or a leader. He’s an expired Chihuahua with the keys to the world, who snarls at anyone foolish enough to take them.

Joe Biden has been in politics since the age of 29. He has real plans for real issues happening in this country, and he knows how to act like an adult.

But you’re not just electing him. You’re electing Dr. Jill Biden, Kamala Harris, and an administration of competent people. You’re deciding the future of our country and our planet.

Remember, voting isn’t marriage, but reviewing a job application. You’re hiring Joe Biden. And if he does a bad job, you can vote him out in 2024.

If you elect someone else, you need to fight for it. Because maybe if you had volunteered, or donated, or had meaningful conversations about one of the other candidates, we would have them instead. It’s not enough to just vote.

If we want change, we need to incite it.

So don’t “Settle for Biden”. Vote for Biden, like your life depends on it. Because for some people, it does. And then volunteer, donate, learn his policies and discuss them.

We have the chance to right four years worth of wrongs that if repeated will send us to an irreversible doom. Don’t throw it away because you don’t like your birthday present. At least you have socks.