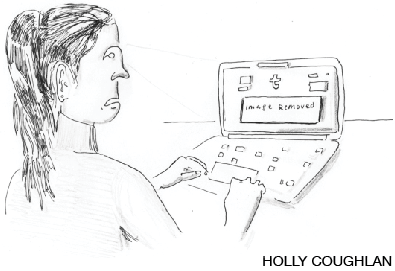 The reasoning behind this ban is that Tumblr went off the App Store, and in order to go back on they have to fix this issue.

Instead of hiring moderators who will ban illegal activities, Tumblr decided the best mode of action was to create a bot that would track for explicit content and delete it.

These bots are already failing to do their job, flagging cartoon drawings with no nudity as pornographic.

Things considered explicit, according to the Tumblr FAQs are: female-presenting nipples, media depicting sex (illustrations included), as well as photos, videos and GIFs of human genitalia.

The reaction online is that this decision is detrimental to the platform.

Though Tumblr did admit there would be mistakes, users worry about years of their artwork being lost.

This ban only touches upon one problem of moderation.

Tumblr has neo-Nazis on the site who are against their hate speech policies, but there is no bot to keep them off.

If you currently go on Tumblr and type in sex, nothing will show up. If you type in white supremacy, however, blogs and posts will come up.

I think anyone can see how this is wrong.

There is a clear need for better moderation of the website, and I am sure that this anti-sex bot is not the key to fixing the problems.

While it is a step in the right direction, there are far better things Tumblr could do in order to fix this issue.

Tumblr should not alienate half its user base and should instead add in a screening process done by humans that will detect anything against their rules.

This is different from a bot because humans will evaluate based off the post itself instead of using an algorithm that may make mistakes.

With humans checking posts, non-pornographic photos and art will not be flagged, thus Tumblr will not lose half its fanbase.

A half-hearted attempt to fix the moderation issue by creating a bot that doesn’t work well may get the site out of the hot seat.

But by doing this, Tumblr is effectively killing its communities and itself.

There must be a better way to solve this.