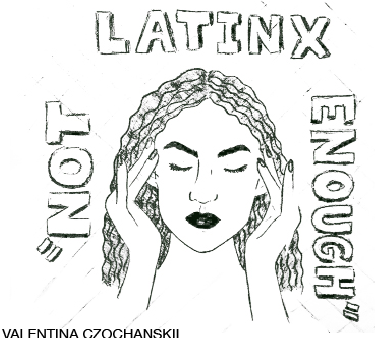 The Latinx community is one of the fastest-growing ethnic groups in America, according to a September 2017 Pew Research Center article.

But they have issues concerning who is actually a part of their group.

Being considered “not Latinx enough” can come from factors like religion and food preferences.

Other factors are more permanent, like being Afro-Latinx or white-passing, which is when someone can be mistaken as white, according to a December 2017 article from Fem magazine, UCLA’s Latin American feminist magazine.

Not knowing Spanish is also a factor. This causes harmful confusion to those “not Latinx enough.”

This image of what Latinx is supposed to be also creates stereotypes outside the community. TV shows such as “Modern Family” and “That ’70s Show” portray Latinx characters as sexualized immigrants with accents, dark hair and “caramel” skin.

The community upholds this image, excluding those who are “different.” By doing this, the Latinx people allow others to stereotype them.

Actress Gina Rodriguez from TV show “Jane the Virgin” was told she’s not Latina enough after her Spanish was criticized, according to an October 2015 HuffPost Live interview.

Rodriguez explained that there are many countries in the Latinx community that are different, so it’s unfair to put Latinx people in a box since we’re raised different ways and look different.

There are 33 countries and dependencies in Latin America, according to a November 2017 World Population Review report. Each country has different cultures, food and languages.

With so many people identifying as Latinx, it’s hard to believe that we would all be the same. When you tell someone they’re not “Latinx enough,” you’re disregarding their family, voice, experiences and the freedom to identify with their culture.

An August 2015 article from Everyday Feminism captured this identity crisis. Carmen Rose, the Puerto Rican and Italian author, wrote how they’re confused about their identity and being questioned makes their confusion even worse.

Being from mixed descent, I related to this since I can’t speak Spanish and I’m not tan.

Instead of alienating each other, we need to stick together, especially in a terrifying political climate where the president is deporting many in our community.

Whether you can’t dance or speak Spanish or are “too black or white” to be Latinx, you are Latinx. Nothing can erase your ancestry and nobody, not even your community, can tell you how to define yourself.