I’m a bimbo and I’m proud 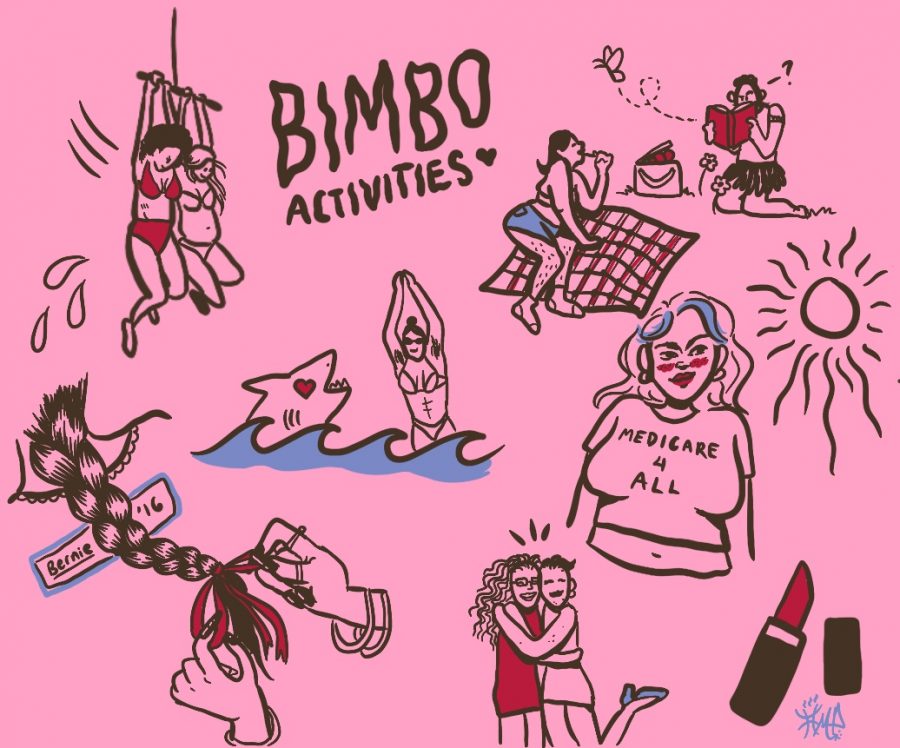 I have always prided myself on my looks. I know some people look at me and say I’m too much. My mom says that I’ve always looked “out there.” In middle school, I wore the shortest black shorts with Taylor momsen-esque ripped tights and had bright red hair with black raccoon eyes. I wasn’t about being a girly girl, but I did want to be as hot as a greasy 13 year old could be.

After my emo phase, I started to be more feminine and girly in high school, as I was overcoming my internalized misogyny. This was also the time Tumblr was popping with nymphet and Lolita blogs filled with girls in pretty pink, listening to Lana Del Rey and fantasizing about being with someone older.

So, of course, I was obsessed.

Now that I am almost 21, I have realized that I want to be sexy, happy, kind and not care about what others think.

And bimbo TikTok has given me the confidence to start my journey as a baby bimbo and to not care if people think I look like a stupid slut who can’t do math. Well….I am pretty bad at math…hehehe.

I am so happy that the girls, gays and theys have begun to reclaim the word “bimbo” and bimbo culture. The word bimbo used to be an insult used to describe “a woman who was all looks and no brains,” according to a  Dec. 8, 2020, Refinary29 article.

So, why not just stop caring about them, and start becoming the best versions of us that we want to be?

Many also need to understand that bimboism is much more than looking pretty, but about being accepting towards others. Bimboism is a way of being. Bimbo TikToker, @parishiltonslefttiddy, says in her “how to be a bimbo part 1” TikTok that “being sweet and non-judgemental to others is what being the ultimate bimbo is really about.”

Another bimbo Toker, Syrena, aka @Fauxrich says that bombos are respresntative of kind, hyperfeminine women who dont judge others and are pro sex work and pro body modification. While many think that bimboism is being dumb and pretty, the values we stand for arent dumb at all.

While some people think bimboism is a step in the wrong direction, they need to open their eyes to understand that bimbofication is about being a good person (i.e. being pro LGBT, anti-capitalist, pro-sex work, pro-BLM and pro-choice).

“The bimbo is somebody who radiates confidence, is comfortable in themself, and doesn’t give a fuck about what anyone says to them,” fellow bimbo Toker Chrissy Chlapecka told Refinary29.

If you’re thinking of passing bimboism off as a new fashion trend, open your mind and look again. You’ll realize that this isn’t just about putting loads of makeup on, wearing stripper heels, and talking in an extra nasally voice, but about femmes feeling confident in their own skin and being supportive of others.

Also their jokes about not being able to read and do math make me so happy, because they’re proving the world that it isn’t a bad thing. Bimboism is a revolt of what our society thinks constitutes (wow, what a big word!) as smart.

As someone who always automatically thinks they’re the stupidest person in the room, due to not being smart with math, science, and grammar, hearing these tik toks bringing light that there isn’t only one way to be smart makes me feel so much better about myself.

We don’t need “pickme” girls and stright men making us feel dumb, especially due to how cute we look. I especially won’t let a straight man who thinks his word is the word of God make me feel like an idiot, when I know I can steal his girlie from him.

Also, what would hurt these “pickme’s” and dismissive straight men the most? Not caring about the shit that spews from their mouth. How sad, you feel the need to talk shit about others because you hate yourself. That isn’t hot girl shit.

What I have to say to them is to stop caring about what others are doing and what others think of you. Put on some pink lip gloss and listen to “Pretty Girl Rock” by Keri Hilson. You’ll feel better about yourself.

It’s shocking how much hate bimbos get! This community is the sweetest ever too! Most people see pretty people as not only dumb but mean.

Lemme tell you, being on bimbo tik tok makes my confidence shoot through the roof as these beautiful bimbos tell me that I should stop feeling insecure because I am pretty or to not care what a man who doesn’t brush his teeth thinks about me.

Being pretty is a mindset, so I decided that I am going to be pretty. We also gotta stop with this joking around about how we’re ugly. That is not bimbo energy at all!

And remember, it isn’t bimbo energy to dress for a man! Unlike what some may think, I’ve never made myself look pretty for men. I do it for other pretty people to compliment me and to become my friends. But, the most important person I dress up for is myself!

It’s fun staring at your face painting it and enhancing its natural beauty! It’s fun shuffling through your closet and looking for a pretty little outfit to wear. It’s fun to beautify yourself.

So, if you are thinking about starting your bimbofication evolution, this is your sign to do it! Put some glitter on your face, put on your highest heels, and most importantly, support the girls, gay, theys.