It is time to take back the textbook market 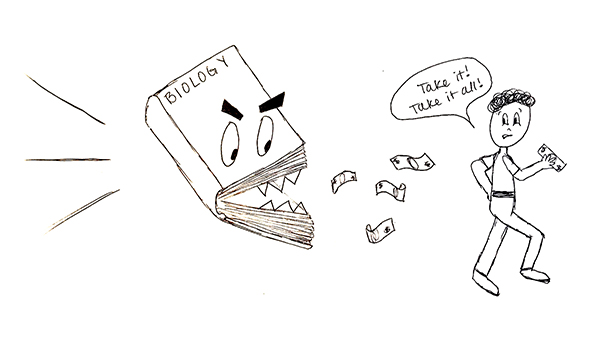 Being a college student in the U.S. means frequent reminders that education is pay-to-play. We pay for a ticket into the “educated” workforce, and we pay a lot.

Rising tuition costs usually dominate the conversation around college affordability, but in recent years, textbooks have also become unaffordable for many students.

The cost of textbooks has risen by over 1,000% since 1977, according to a March 6 Vox article. Production costs and rising demand can’t explain the rise, which is three times faster than the rate of inflation, in book costs.

Although individual professors do play a role in burdening students by assigning expensive textbooks, the real culprits are publishing companies.

Four companies control over 80% of the textbook publishing industry: Pearson, Cengage, Wiley and McGraw-Hill, according to a 2016 Public Interest Research Group report.

Together, these companies have total control of the textbook market, avoiding competition by allowing each other to dominate textbook publishing in specific subject areas.

In other words, these four companies have almost entirely captured the textbook market.

The consequences of this arrangement are huge: professors have little choice selecting textbooks and students are forced to sacrifice either finances if they buy their books, or their education if they don’t get a textbook.

Publishing companies have acknowledged the increased cost of textbooks and offered “affordable” options for students, but their responses to the problem are just exploitation disguised as solutions.

E-books, although cheaper than print books, often can’t be resold or passed down to fellow students. As a result, publishing companies can ensure that students are buying their books at full price every single time.

The introduction of subscriptions, where students pay a flat fee to access books from a publisher, or inclusive services, where students get textbooks at full cost, operate via the same principle: limiting the books that can be shared or resold, and maximizing the amount of new, full-price sales.

The few decent alternatives that exist, such as open-source textbooks, represent Band-Aids rather than real solutions.

Open-source textbooks are cheaper books created by faculty, meaning that instructors are forced to spend extra time and work in order to make class materials more affordable for students.

Student and faculty groups should focus on pressuring elected officials to identify the greed of publishing companies.

The government has the power and responsibility to utilize antitrust and anti-monopoly measures to break up total controls of markets that are harming Americans.

This is what we should be demanding when it comes to making textbooks more affordable.