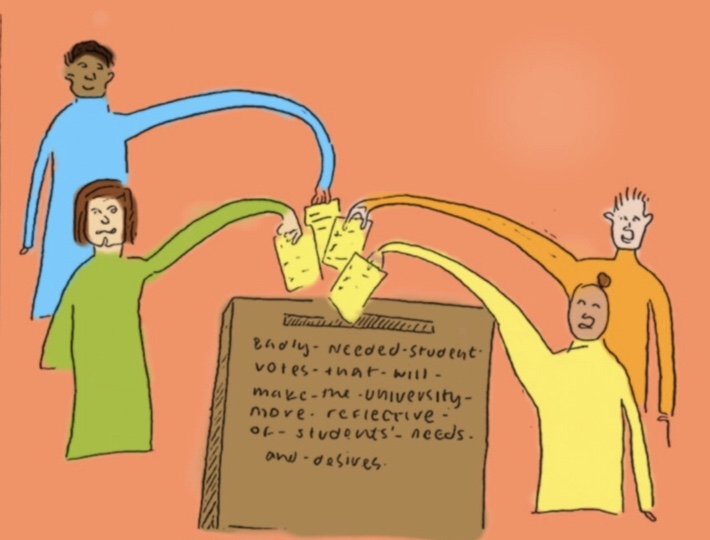 No matter who you’re voting for, we should all vote in SGA elections.

In recent weeks, there have been parallel student movements: a wave of protests and the arrival of SGA presidential campaigns. We must recognize that these movements are two sides of the same coin — accurate representation for us as students.

Protesting system failure is important, but we must also use the system to our advantage. If we don’t vote in SGA elections for people who represent what we feel is most important, all the protestors’ efforts will have been for nothing.

Many people doubt SGA’s ability to make real change. We don’t hear about them in the news every day, but that doesn’t mean that they don’t make a difference on campus.

For example, they recently passed legislation for outdoor trash cans on campus, according to their website, because of student responses.

Whether they advocate for cheaper parking off campus, increased funding for identity centers or hiring more campus victim advocates, their ideas are the product of student voices.

No matter who you vote for, you can rest assured that you are making the right choice by voting at all.

If you do not vote, you’re giving up a chance to have a say in the university where you live, work and study, a place that was and should be by you, for you.

This past November during the midterm elections, you couldn’t go three feet without passing an “I Voted” sticker or someone posting a link to their polling place on social media. This urgency led to huge voter turnout and results that changed the country.

Today, people’s enthusiasm for voting has evaporated. If we want results like last November’s, we need to replicate the processes.

We need the passion that drove us to vote early, vote by mail or even just vote at all to make this election count.

Let’s continue the momentum of the protests in our own elections. Set an alarm. Spread the word about your favorite candidate.

The Cynic accepts letters in response to anything you see printed as well as any issues of interest in the community. Please limit letters to 350 words. The Cynic reserves the right to edit letters for length and grammar. lease send letters to [email protected]