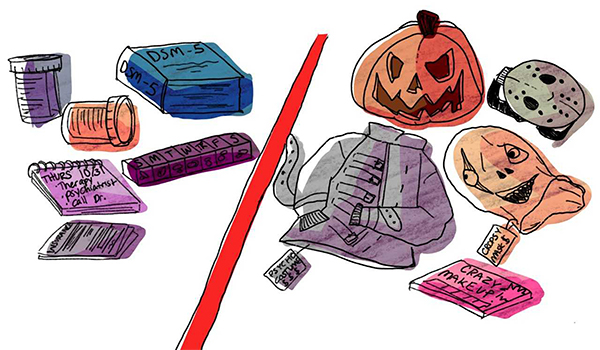 On Halloween night, a group of kids walked into the woods, never to be seen again. Some say it was an escaped mental patient who snatched them.

Many famous urban legends share this storyline. While variations of these legends all start differently,  the villain often has a mental illness.

One of the most famous urban legends is “Cropsey,” which originated in Staten Island, New York.

In the legend, Cropsey was an escaped mental patient who lived in the abandoned Willowbrook Mental Institution. Crospsey would snatch children off the streets at night.

While legends like “Cropsey” are a fun and spooky way to warn children to not go out alone at night, it enforces the trope of the mentally ill being dangerous to the public.

One of the biggest problems I have with “Cropsey” is how it’s based around Willowbrook, an abandoned institution that was infamous for keeping their patients in unhygienic living conditions, abusing them and even exposing some patients to hepatitis, according to a March 2008 NPR article.

Associating the legend’s murderous, mentally ill escapee with this institution, where patients were innocent victims, links them to atrocities committed by “one of their own” and not by the abuse they suffered at the hands of those who were supposed to be helping them.

After Willowbrook closed in the ‘80s, the legend became stronger. Andre Rand, a former custodian of Willowbrook, was charged with kidnapping of four children, one of whom was found buried in a shallow grave on the abandoned grounds, according to a Jan. 8 The Lineup article.

These murders intensified the fear against those with mental illnesses, as many continue to associate them with Cropsey.

A mentally ill boogeyman might be more believable to some because of the horrific nature of their actions, but they generate misconceptions about mental illness.

This reinforces the myth that people with mental illnesses are dangerous and harmful, according to Doris Schwartz, chief operating officer of the Mental Health Association of Westchester County in New York, in a May 2016 HuffPost article.

As these myths surrounding mental illness continue to live on through urban legends and other entertainment, many will not reach out for help. Undiagnosed mental illness can lead to sleep loss, hallucinations and suicide, according to the HuffPost article.

While it may be cool to tell urban legends and explore abandoned asylums, people need to understand the history surrounding them and that actual people were affected by these legends.

Just because there is an urban legend about a mentally ill murderer doesn’t mean that every mentally ill person is going to become a murderer.

We don’t need to continue the stigma around people with mental illness by making them into local boogeymen for our own entertainment.