Perspectives: UVM Should Be Doing More for Survivors of Sexual Violence 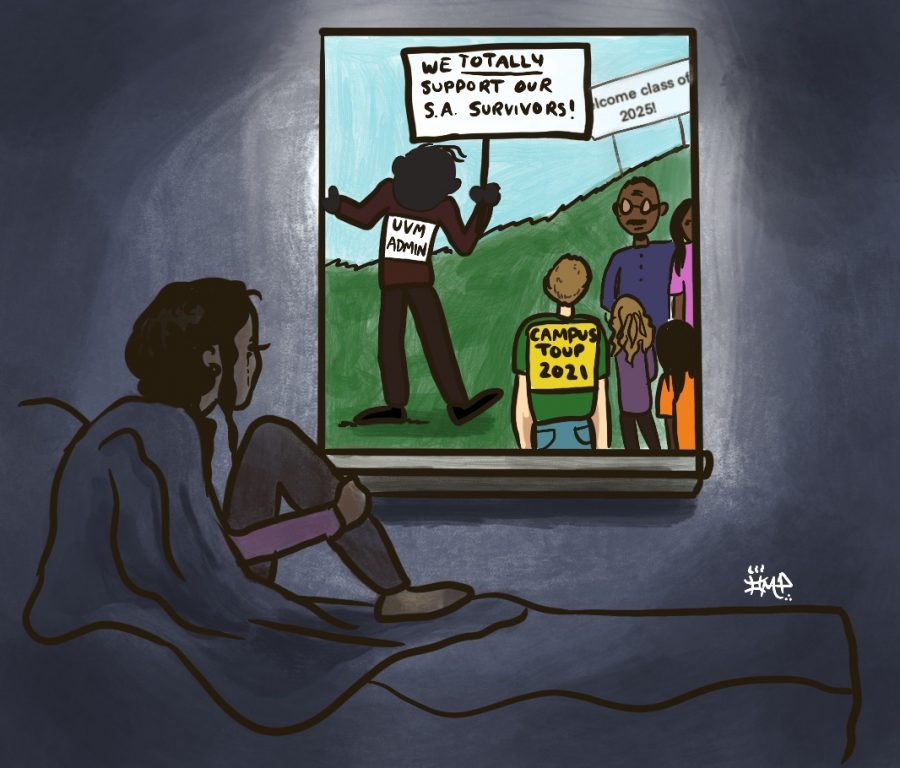 According to the Rape, Abuse, Incest, National Network (RAINN), sexual violence on college campuses is pervasive.

“Among undergraduate students, 26.4% of females and 6.8% of males experience rape or sexual assault through physical force, violence or incapacitation. And college women, ages 18-24, are also at an elevated risk of sexual violence.”

With data this staggering, one would think that universities would dedicate enough money and resources to the epidemic of sexual violence on college campuses.

As a freshman on campus, newly elected to UVM’s Student Government Association in the Spring of 2019, I was determined to inspire change on this campus and fight to ensure that the UVM Administration did more for survivors of sexual violence.

I naively thought that it would be easy. I thought that UVM administrators would gladly come on board to support my proposals to provide more meaningful support for survivors.

Unfortunately, I was wrong.

My first project as a Senator on UVM’s Student Government Association as a member of its Committee on Diversity, Inclusion & Equity was to advocate for more Campus Victim’s Advocates on our campus.

UVM’s Campus Victims Advocate according to the Women & Gender Equity Center is responsible for serving as a confidential source to provide counseling, options, information and advocacy for survivors of sexual violence.

How could UVM with an undergraduate population upwards of 11,000 students only employ one person to support survivors when we know that sexual violence is such a pervasive issue on college campuses? How can the University only employ one Campus Victims Advocate when we know that sexual assault is one of the most underreported crimes, one that often leaves long-term effects on survivors?

The more I learned, the more I grew disappointed at the University’s lack of support for survivors of sexual violence.

So with my fellow Senators on SGA, we began to formulate a plan.

The overwhelming majority of UVM’s comparator institutions have Sexual Assault Response Teams or entire departments, dedicated to supporting survivors of sexual violence, with directors, administrators, as well as multiple domestic and sexual violence therapists and counselors available to undergraduate students.

Many of the same universities had resources for student survivors available 24/7, 365 days per year. UVM still only had one Campus Victims Advocate, and I continued to grow more determined to make my case to administrators.

As a Political Science Major with a tendency to be rather argumentative, I remember walking into a meeting with a UVM administrator overly confident, prepared to present my findings and make my case for more Campus Victims Advocates on our campus. I left the meeting slumped over and defeated.

Despite my countless hours of research, I and another SGA Senator were told that adding another Campus Victims Advocate was just too expensive, that the University didn’t have funding for it, and that there were resources for survivors of sexual violence outside of UVM. I walked back to my dorm on Redstone campus confused by the blatant dismissal of our proposal.

Enough is enough, no more excuses.

As an institution such as UVM that strives to be known as a premier research institution and a “public ivy,” our University should be leading the way in combatting sexual violence. Instead, UVM falls embarrassingly far behind other universities when it comes down to supporting survivors of sexual assault and harassment.

And for all students who are survivors here at UVM…I see you, I hear you and I believe you.