Pondering over the post-grad job market 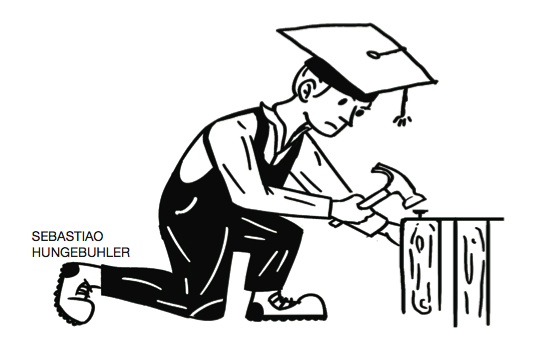 As a college graduate, it seems, my job prospects are fairly limited. I’m wondering if I can collect unemployment benefits immediately upon graduation.

Yes, many places are hiring. Chipotle is always looking
for people who can tolerate asking a thousand people a day whether they would prefer black or pinto beans.

I was talking to the philosophically-minded Sarang, one of the people I talk to about such things, about our job prospects after college. We were driving back up to VT from D.C. It was just him and I in the car, so I had to talk to him.

I told Sarang I’d been imaging going to my upcoming High School Reunion. Five years since we graduated. People would be talking about the internship they got at Goldman Sachs, or about starting law school. What are you up to, they’d ask me. Oh, I’m walking dogs this summer. Oh, that’s cute, they’d say.

We agreed that we’ve been raised to look down on manual labor. I think this is dismaying, but if I got a job doing physical work, or a job in the service industry, it would seem like I had just wasted four years of my life. Not for nothing though: if I got a job in construction in DC, I’d probably make more money than even my business major peers who would be getting jobs in finance straight out of college.

Washington, D.C. is currently experiencing a housing boom. There are two construction projects on my block alone. Whole rows of row houses are being demolished to make way for “luxury” condos and apartments.

I was telling my friend that I wouldn’t even know how to go about getting a job in construction, yet that seems to be where there is a great deal of new, decent paying jobs.

Working in construction is not easy and can be dangerous, but a skilled construction worker in D.C. can expect to make more than $50,000 a year, according to the Bureau of Labor Statistics. In New York City the median wage for a carpenter is almost $70,000 a year; in D.C., it’s $46,000.

We stopped at a gas station in New Jersey. New Jersey law requires all gas stations to be full service –– you’re not allowed to fill your tank yourself.

There were a couple guys standing around smoking cigarettes, one of them came to our car when we pulled up.

“Now that would be a decent job,” I said to my friend. “Are you kidding me,” he said. “That job would suck.”

I thought it would be a decent job just because you didn’t have to do too much. Just stand around and occasionally pump gas.

What about being a cop, I asked Sarang. Like a detective. That might be alright; solve some crimes, try not to shoot innocent people. Not to disparage what I’m sure is a hard and often thankless job.

We passed through numerous tolls on I-95. We paid $13 to cross the George Washington bridge into New York. That sort of makes sense. I wondered if it was free to leave New York and go to New Jersey.

But passing through, we had numerous brief interactions with the toll collectors, mostly consisting of some salutation and then the statement of how much we had to pay.

The problem, we agreed, is that we wanted to do something that we were suited to, that would be challenging and rewarding, and that perhaps would lead to at least modest recognition and perhaps fame.

Security guards, toll collectors — hell, even state troopers — there certainly were a lot of jobs where you could get paid to stand, sit or cruise down the highway all day.

It’s scary graduating and trying to decide how you’re going to make a living, but the other day I had a revelation: I had plenty of time to get my dream job.

Right now, I have a world of opportunity to experiment, try out different things, try to get my foot in the door. Maybe I could be a detective. A fireman. A teacher. Why not be a ski instructor for a couple of seasons?