The state of racism: it’s not geographic 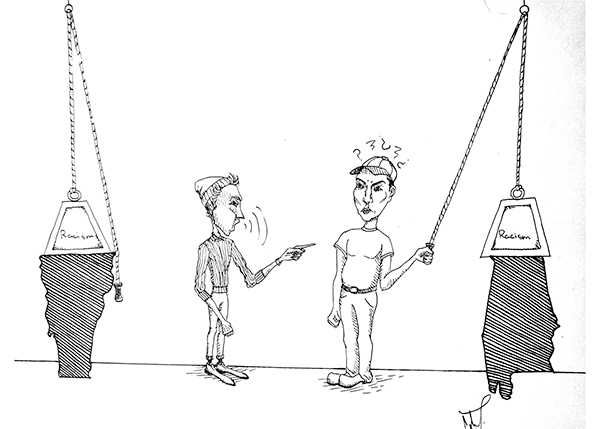 Every time I tell someone I am from Alabama I get the look.

You know the one I am talking about, a mixture of shock at my being in Vermont and my pride towards my home state.

I’m not here to say Alabama is the greatest. I know my home state has its issues, but I see a real problem with the way Northerners tend to treat Alabama’s existence.

Alabama and other southern, “less liberal” states are used as scapegoats by the North to avoid responsibility for the racism that exists here.

The racism at UVM, often referred to as a “white liberal bubble,” could never compare to the state of Alabama’s racism, but that doesn’t mean it doesn’t exist.

The tendency of whites, especially in the North, to look at racism in the stereotypical “Jim Crow” way completely ignores how racism functions in modern society. Jim Crow laws are gone, but racism is still alive and well.

In his book “Racism without Racists,” Eduardo Bonilla-Silva explains the different ways to view racism: “For most whites racism is prejudice, for most people of color racism is systemic or institutionalized.”

Georgia made national news this year for its conversations over institutionalized racism within voting, a conversation that was largely possible because of Stacey Abrams, an African-American woman who ran for governor.

Vermont, on the other hand, lost Kiah Morris this year, the one African-American woman in the State House because of what she described  in a 2018 New York Times article as “a year-long campaign of racially motivated harassment and threats” that was largely ignored by the Vermont community.

If racism is not defined by its institutionalized characteristics, then racism has no chance of being changed. Even in Vermont, a state with a small population of minorities, it’s still a pressing issue.

My point is to say that my state, even with its problems, should not be used as a way to say, “we’re better so we don’t need to change.”

Here in the United States, racism exists in every state.

In order to improve our society for the benefit of every human, we need to recognize our faults, and it’s time the North owns up.