The trials and tribulations of printing 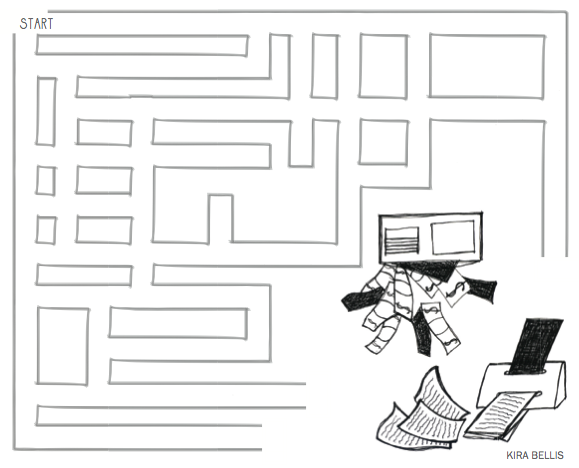 Last Tuesday morning, I needed to print some pages; 140 pages, to be exact.

I had to print 20 copies of my creative writing story for all the kids in my class, so we can assume I was already annoyed having to spend $14 on printing, but then I had to go through the UVM printing process. 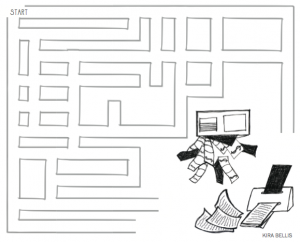 I’ve had gripes with printing at UVM since I started here, but that morning it was particularly pissing me off.

I walked into the library and checked my CatScratch balance. It was only $2.72. Grumbling under my breath, I made my way over to the Davis Center because I didn’t have enough cash in my wallet.

I had to get $20 from the ATM, but since my bank card is for the local bank in my hometown, I had to pay another $3 in fees. Then I had to go back to the library, load my card and suffer the awkwardness of holding up everyone else while I printed 140 pages.

Why is that process necessary? I felt like I was jumping through a million hoops just to be able to print. They make the process way more inconvenient than it needs to be.

For starters, the CatScratch machines should take cards. Pretty much all the vending machines on campus do, so it wouldn’t be that hard to implement.

I feel like a lot of people don’t carry that much cash on them anymore, so it would make a lot of sense. Also it would have prevented me having to lose $3.

Also, why don’t the machines take change? They only take bills. What if I only need to print one page and I know I’m not going to need to print anything else for a long time?

I still have to put at least a dollar on my card, and then the other 95 cents are basically trapped there. And now I’ve lost pretty much a whole dollar when I didn’t really need to.

Why do we need to use CatScratch to print at all? We didn’t used to. When I was a first-year, I always printed in Waterman, where I could use any form of payment I wanted.

I had to pay 2 cents more per page, but it was worth it not to have to deal with CatScratch. My coins could actually be used up and I wouldn’t have to trap money in a silly form of payment.

And this brings me to my last gripe: why do we have to pay for printing anyway? I understand that printing costs money, but we should get some kind of allowance for it. At many other colleges, students are given a certain amount of pages they can print without additional cost.

Why don’t we have a system like that? We pay enough tuition money — we’re in the top five most expensive public schools in the U.S. — it doesn’t seem unreasonable to be able to allocate even $20 of that to a printing allowance.

But since this is UVM and I doubt that is going to happen any time soon, can we at least get the CatScratch machines to take change and cards? I am sick of having printing be such an ordeal.