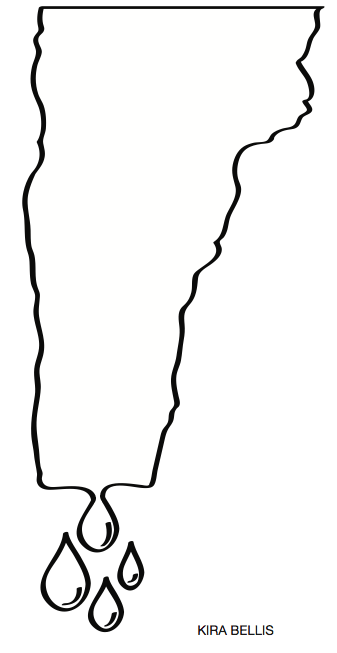 Recent worldwide environmental catastrophes have finally forced needed attention on climate change and the negative impact we humans have made on our planet.

The magnitudes of Hurricanes Harvey, Irma, Jose and Katia as well as countless tornadoes and tropical storms are irrefutably correlated to our disregard for the planet’s well-being. Now we’re paying the price.

Hurricane Irma officially broke the record as the most powerful hurricane in the Atlantic according to the Observer.

According to a Sept. 1 NY Times article, Hurricane Harvey is estimated to cost be- tween $70 and $108 billion. For reference, Hurricane Sandy cost $70.2 billion. The most expensive natural disaster in the U.S., Hurricane Katrina, cost $160 billion.

Even Vermont has seen quite a few unnatural natural disasters. Mountainous terrain is supposed to make tornados nearly impossible– historically, Vermont doesn’t have a tornado season. We have an average of zero tornadoes per year. But about a week before move-in day, we had a tornado watch and a massive downpour.

Honestly, talking about climate change at UVM is like beating a dead horse. The vast majority of UVM faculty and students fervently believe the scientific fact that our species has created a very new, very unnatural form of climate change.

But the onslaught of these natural disasters– so many that it has grown difficult to keep up with which storm is devastating with community– is a reminder that we must not sit and accept our fate.

UVM’s commitment to sustainability is not simply a publicity pitch. Our LEED-certified buildings, though beautiful and energy-efficient, are not the reason the University invests people, money and time into environmental research.

Our community hosts climate summits and offers environmental sustainability classes because we know that the generation about to graduate is going to need the skills to solve massive, complex climate issues.

And these global issues have a local, maple-flavored impact. Vermonters have already adjusted their crop rotations to changing growing seasons.

When winters are weak and snow coverage at Stowe and Sugarbush is low, it isn’t just UVM winter sports fanatics who suffer.

The people who work in the winter sports industry lose their jobs. According to 2014 research commissioned by the National Resource Defense Council, up to 27,000 people lost their jobs between 1999 and 2010 due to low snowfall seasons.

It isn’t just the livelihoods of our neighbors that are at stake when the climate is unpredictable. The last few weeks have reminded us that the lives of our friends in Florida, Louisiana and Texas are at risk, too.

According to AccuWeather, the number of intense rainfall events has increased significantly in the past century.

Their 2013 research study showed that the number of climate-related disasters and meteorological events (such as floods, tropical cyclones, lo- cal storms, heat/cold waves, drought and wildfires) has increased by nearly 400 percent since 1950.

We were warned years ago that “natural disasters, particularly floods and storms, will become more frequent and severe because of climate change,” according to the New England Journal of Medicine.

The same article warned that the need for international relief would grow as natural disasters brought on by climate change grow more and more frequent.

But while we’re “going green” and priding ourselves on our sustainable efforts, the greater issues lie outside our kale-infused bubble.

We cannot let the attention to this massive issue subside. We call on all students– environmental studies and finance majors alike– to keep the conversation going.

Beyond the conversation, members of the UVM community must take their education and broach the major issues facing our generation. It’s never been clearer how many lives depend on it.