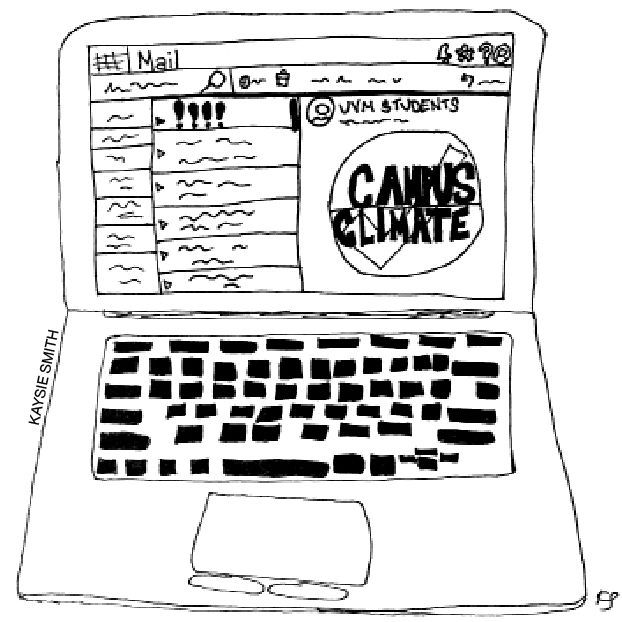 Everyone wants change to happen, but no one is willing to put the work in, especially if that work makes them feel uncomfortable.

The survey  provides data that helps ensure diversity and inclusion are sustained on campus. It also informs the University of where improvement needs to be made, according to UVM’s website.

The survey reports 47% of faculty and staff and 50% of students try to avoid conflicts regarding discussions of identity issues.

However, 62% of faculty and staff and 77% of students agree that these conflicts enrich learning.

While it may be uncomfortable to place yourself in a sensitive discussion involving an identity issue, especially if you’re not personally a member of that identity, being uncomfortable is one of the only ways change and  learning can happen.

If students who aren’t part of a certain identity group feel uncomfortable about a conflict, imagine how a member of the community being discussed feels when a conflict arises.

I’ve been in certain discussions involving racism in the U.S. in my classes.

In these situations, I mustered the courage to speak up because I was one of the only students who identified as a person of color.

Members of identity groups shouldn’t have to be the spokesperson for their entire identity group every time a conflict arises in class.

30% of faculty and staff and 42% of students feel that it’s important to educate others about the challenges of identity groups to which they belong, according to the survey.

If the percentage of faculty and staff and students who agree that conflict enriches the learning process became involved in conflict, it would take pressure off of those in the specific identity groups being discussed.

What’s most interesting about this issue is that 86% of faculty and staff and 82% of students want to learn about other identity groups, according to the survey.

If this many people want to educate themselves, people need to realize that engaging in conflicts regarding identity issues will help them to learn.

Participators in the discussion will learn how that community and others may feel about different identity groups.

It’s fine to not know everything about an identity group and to make honest mistakes.

College is the time when students should be encouraged to say “difficult, or even offensive” things as part of learning, according to a February 2010 Inside Higher Ed article.

Everyone needs to be involved in the discussion in order to be able to learn and to grow.

Just because someone isn’t as “woke” doesn’t mean they’re bad; it just means that they need to be included in the discussion.

Views and opinions can change through conversation. If UVM’s faculty and staff, as well as UVM’s students, attempt to discuss and to learn, they’ll become allies for the many identity groups on our campus.

In order to be a part of uncomfortable discussions, people need to remember to be open, patient and to have a positive mindset.

Conflict shouldn’t be viewed as a scary thing but as a way to grow as a person.

For our campus to be aware of the value of diversity, everyone needs to participate in conflict and discussion, as it’s one of the only ways for everyone to move towards being comfortable.