We’re a house divided and starting to fall 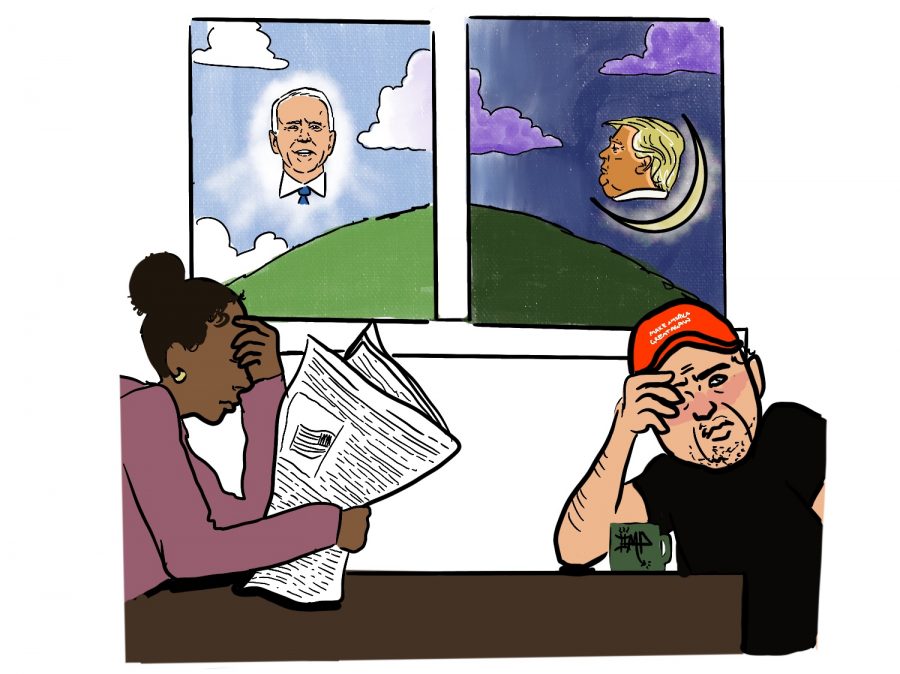 I learned of Joe Biden’s victory in the fitting rooms of American Eagle, where I work. The news promptly sent me into diabetic shock and I was forced to sit down for twenty minutes.

I’ve still not fully recovered from the good news. Every so often, I get excited about what a Biden presidency might bring- like what song he and Jill will dance to at the Inaugural Ball, or the pets he will bring to Pennsylvania Ave, amongst actual political policy decisions.

As exciting as it all is, America has now entered what in soccer we call “a dangerous minute.” One team has just scored, and now the other team is waking up, hungry to get one in as revenge.

In soccer it’s dangerous because you might get scored on. In this real life scenario, we risk more than a goal- civil uprising for instance.

Fueled by their head huncho’s antics, Trump supporters are refusing to accept Biden as their president elect.

Most are concerned that the election was somehow tampered with. Others are worried that Biden will destroy the country with his policies, uprooting the work Trump has done for them.

Both worries are valid, and surely would be matched by Biden supporters if the election had gone the other way.

The reality of our situation is this: our political parties are more polarized than they have ever been- even during the Civil War according to a graphic by Brookings Historical House and a Pew Research poll. The members of said political parties are at each other’s throats, convinced their opponents are ignorant, incompetent morons who should never be put in charge of the country, lest they burn it to the ground.

America is one big, unhappy family and it’s time we all went through counseling before one of us shows up at the kitchen table with divorce papers.

The frustrating thing is both sides see it happening.

In a New York Times article from earlier this week, pastor Donna Rigny a loyal Trump supporter, said, “I don’t think our world will ever get back, when you have a country this divided.”

Democrats, too, feel the same way.

So then why haven’t we compromised, or at least attempted to start a conversation about what our future as a country looks like.

Maybe we’re all too proud. Or maybe we don’t see ourselves getting along with people so different from us. Regardless of the reason, it is dire that we figure out a reason past it, and fast.

Because even if our situation doesn’t end in civil war, party against party, our future as a democracy is still not looking very bright.

Our parties hate each other so much that we wish the other’s vote wouldn’t count. Media platforms demonize each political party, showing the images we want to see of our opponents.  Congress is in gridlock more often than not, refusing to step across the aisle to support legislation that doesn’t conform with their party ideals.

I’ve read a few articles in the past couple weeks that pick apart our political history, trying to pinpoint a moment in our tumultuous timeline when things fell to pieces.

At this point, the more time we spend looking backwards, the less time we have to send our country forward. We can debate the effects of Reaganism and Trumpism and Clintonism until we’re blue in the face.

But our political dinosaurs have done their damage. It’s high time we started fixing it.

Dave Chappelle hosted SNL last week. While he only appeared in one sketch, he made up for his absence with a sixteen minute opening monologue which he spent ragging on Trump, smoking a cigarette, and toeing the line between funny and problematic as only he can.

I urge everyone to watch it.

America under Trump was full of marginalization. African Americans continued to be targeted for the color of their skin. Muslims and Mexicans were alienated. Women felt their voices weren’t heard, and feared for their rights.

But wouldn’t it be nice, after four years of dehumanizing, destructive, and downright evil leadership to rise up and demonstrate how real leadership acts. How a human being acts.

I hear the high road is awfully pretty this time of year.