When party loyalty is unconstituted 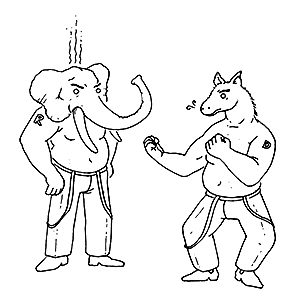 With President Donald Trump’s impeachment trial under way, it is clear that some in Congress are willing to stay loyal to their political party, even if doing so is against the Constitution.

Take a look at the impeachment trial in the U.S. House of Representatives: no Republicans voted to impeach Trump, according to a Jan. 6 NPR article.

The evidence was laid out in a house debate over the articles of impeachment: Trump abused his power and obstructed Congress.

Despite documentation from Democratic representatives indicating a quid pro quo, a favor granted in return for something, the Republican Party stood firm in their stance that Trump did nothing wrong.

It is irrelevant to the impeachment of Trump to simply deny his wrongdoing, rather than investigating the articles of impeachment.

Republican leaders are using this talking point non-stop. It seems as though whatever Trump says is fact to their party. Trump runs a tight ship; any sign of disloyalty could end in being called out by the President on Twitter.

Back in November, Trump’s approval rating among Republicans was 74%, yet on Twitter and in person he declared a 95% approval, according to a November 2019 Washington Post article.

He shares a higher number to make people think he has a higher amount of supporters, which in return will make fewer Republicans support impeachment.

Yet all of this begs to ask if it is right to support one’s party if it means breaking the duties of Congress.

All members of the Senate are sworn to “support and defend the Constitution of the United States against all enemies, foreign and domestic,” according to the U.S. Senate.

Members of the Senate are effectively breaking the oath they swore to by choosing party loyalty over defending the Constitution.

I believe the Republican Party will never impeach Trump; he will be acquitted of his crimes. Yet, it is unprecedented that the Senate is not holding a fair trial.

The Republican Party should not overturn wrongdoing just because they are the majority, especially when considering that the leader of that party most likely broke a law.

The American public deserves a Congress that will ensure fair trials for high level officials. No one should be above the law.

Those in power should follow the law no matter what side breaks it.