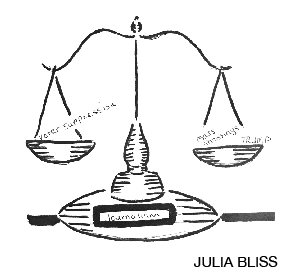 In an Oct. 30, 2018 piece I wrote, I tried to defend the benefits that come with a nonpartisan, representative press.

I admit that it was a rather optimistic outlook on the state of freedom of speech in our country and one that doesn’t hold up very well in our current political climate.

The question I sought to answer was: How can newspapers remain objective when one side isn’t telling the truth?

Ideally, other sources would point out the lies and mistakes in hopes that the offending source will correct itself next time.

This seems to be the strategy chosen by most journalists regarding President Donald Trump’s habit of disregarding the truth.

However, as long as journalists devote time towards fact-checking Trump, important issues will continue to go under-reported.

In the same article, he is said to have told more than 5,000 lies in his first 600 days as president.

Newspapers could continue reporting every false accusation and exaggeration, despite it being a tedious effort.

Some claim that ignoring Trump’s false narratives is our best tool of defense, as Jim Rutenberg did in an Oct. 28 New York Times article.

Many would disagree with that view, as it ties back to the press choosing what is important to cover, which could be seen as biased.

To see an example of the problem of unbiased reporting, look at the differences between the migrant caravan and voter suppression stories.

While the issue of voter suppression has fortunately gotten more attention the closer we get to Nov. 6, for a while it had roughly even coverage as Trump’s fear-mongering depiction of the caravan.

One is a couple thousand people, still thousands of miles away, coming peacefully to seek asylum.

The other is government officials blatantly disregarding hundreds of thousands of our citizens’ democratic right to vote.

Of course both issues are worth covering. An Oct. 26, 2018 statement by the New York Times explains that:

“It’s not our job to pretend that the caravan and the president’s response are not happening.

“To the contrary, it’s our mission to explain, with clarity and fairness, what is real, what is not and why it matters.”

However, media sources have to be careful how much attention they give any particular topic.

“Obsessed with all things Trump — caravan invasion, anyone? — and occupied with breaking news about hurricanes and mass shootings, the networks have almost ignored voter suppression.”