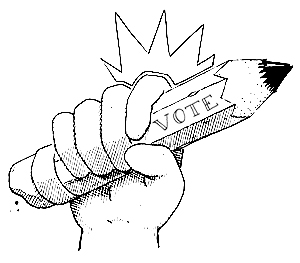 In 2018, Vermont had the second highest number of female legislators in the country with 39.4%, according to a 2019 Center for American Women in Politics study. In Burlington, five out of 12 city council members are female.

However, the U.S. as a whole ranks 75th in women’s representation in government, according to an April 2019 CNBC article.

This is a bleak statistic considering the fact our country has local, state and national government agencies.

Congress’s average age is 57.8, according to the Congressional Research Service.

Elderly people being involved in politics are not an issue. The problem occurs when representation is only coming from older generations, and not the younger.

Sharon Bushor, the incumbent for Ward 1 said to the Cynic Jan. 22, “I think we are shortsighted if we think my generation is the only generation with ideas,” she said.

Bushor has served in this position for over 30 years. Despite wanting to continue, perhaps it is time she hands this ward to the next generation.

Scannell is UVM’s SGA president. Hightower and Stromberg are the Progressive Party’s nominations.

Each candidate has their own platform but all share something in common: they are young women in politics.

The 2018 midterm elections brought a new record to Congress: 102 women were elected, and of the entire freshman class, more than a fifth were millennials, according to the Pew Research Center.

The youngest millennial is 23 and the oldest is 38. It is about time millennials have a voice in Congress. When I was a little girl all I saw in positions of power were old white men. I want that to change.

Millennials and Generation Z deserve to have candidates that stand for what they want. After all, these towns and cities will be passed on to them.

So thank you, Scannell and Hightower, for being the change I wish to see. It is inspiring to see fresh faces in politics.