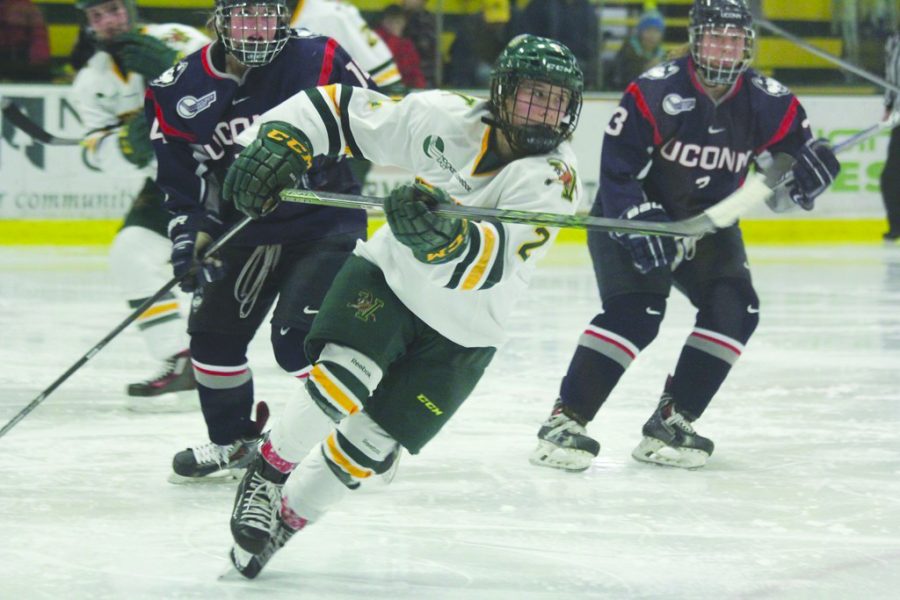 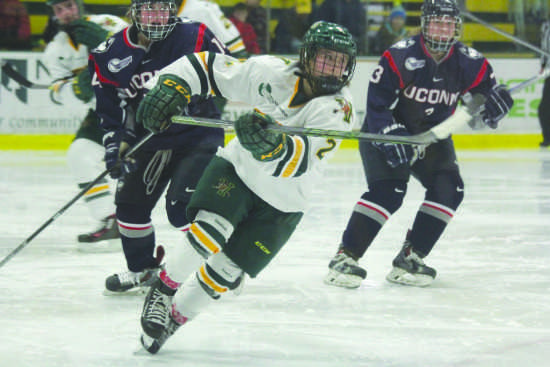 hanks to an annual charity challenge, the women’s hockey team saw a larger than average crowd in the stands Jan. 29.

The Catamounts, who have averaged 372 fans per game this season according to U.S. College Hockey Online, drew 1,662 spectators to their 2-1 defeat by visiting University of Connecticut, nearly four times their normal crowd.

The reason for this draw was that this game was labeled as the third annual Pack the Gut, with the goal of breaking the Hockey East attendance record for a good cause.

Pack the Gut started in 2013 and was the idea of then-senior Danielle Rancourt, a volunteer for Meals on Wheels, which is an organization that provides home-delivered meals to people in need, accourding to a Jan. 16, 2014, UVM athletics press release.

After volunteering with Meals on Wheels, Rancourt saw an opportunity to promote women’s hockey and help the community in the process.

The goal was to both break the Hockey East women’s attendance record of 1,498 and raise money for Meals on Wheels.

The first Pack the Gut took place Nov. 8, 2013, against Boston College, and the first goal was reached: 2,028 showed up to Gutterson to see UVM’s 6-1 loss to the Eagles, according to director of CatamounTV, Nich Hall.

Five percent of all merchandise sales went to Meals on Wheels, as did all proceeds from a second period chuck-a-puck contest.

Meals on Wheels also handed out T-shirts to attendees and accepted cash or check donations, according to UVM athletics.

The event has since become an annual tradition.

Though the record from the previous year was not broken, the crowd of 1,320 that witnessed the Catamounts’ 4-0 win over the Dutchwomen was the season’s highest for a regular season Hockey East game.

This season’s Pack the Gut saw Meals on Wheels handing out tote bags to attendees, while SGA passed out socks and TD Bank provided banners.

The Jan. 29 crowd of 1,662 was the second highest in program history and third in Hockey East history, according to a Jan. 29 tweet from the women’s hockey team.

More than $600 was raised for charity, according to UVM athletics

This year’s game was picked in particular due to timing, according to Hall.

“We wanted to have the game in the second semester, and this was the earliest date where all of the UVM students were back,” he said.