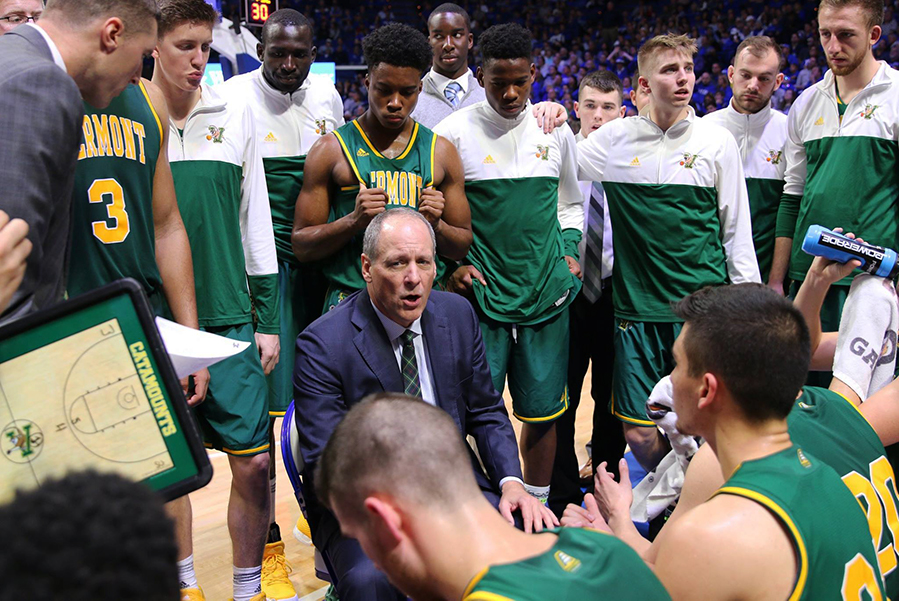 The men’s basketball team huddles together during their game against Kentucky Nov. 12. The Catamounts are currently 6-2.

While most students headed home for Thanksgiving break, the Vermont men’s basketball team packed their bags for the Islands of the Bahamas Showcase in Nassau, Bahamas.

The tournament took place Nov. 17-19. The Catamounts played the Bradley University Braves in their first game.

The game was close but ended in Vermont’s favor with a score of 65-64.

The Catamounts moved on to the semifinals the following day. Vermont defeated the Coastal Carolina University Chanticleers by a score of 80-67.

Redshirt junior guard Ernie Duncan scored 19 points in the game. With the win, Vermont secured a spot in the finals.

Their final game was played against the Northern Kentucky University Norse.

Another close game resulted in a win for the Catamounts and an overall win of the tournament.

Despite trailing by as many as 13 points in the second half, the Catamounts would rally and defeat the Norse by a score of 66-64.

Sophomore forward Anthony Lamb scored 26 points in the game and had 14 rebounds.

Prior to the tournament, the men’s last game was away Nov. 12 against the University of Kentucky. Vermont lost 73-69.

Despite only scoring 24 points in the first half, the Catamounts came back to score 45 in the second half, according to UVM athletics.

However, following the tournament, the Catamounts’ winning streak continued.

At home, the team played against the University of Maine at Fort Kent Nov. 22. The game resulted in a 90-54 win.

Their next game against Yale University in New Haven, Connecticut, Nov. 25 was also a very close game.

UVM held a one-point lead on the Bulldogs at halftime, and would hold on to win the game 79-73.

Lamb scored 22 points and had seven rebounds while  Bell-Haynes had 10 assists, according to UVM athletics.

The team then traveled to Virginia where they played the University of Richmond Spiders Nov. 29.

Duncan scored 21 points, Henson had eight rebounds and Bell-Haynes had six assists, according to UVM athletics.

Vermont continues their span of away games in the week to come.

Their next game is Dec. 2 against Bucknell University.

They play again Dec. 5 against Marquette University and Dec. 9 against Northeastern University, according to UVM athletics.