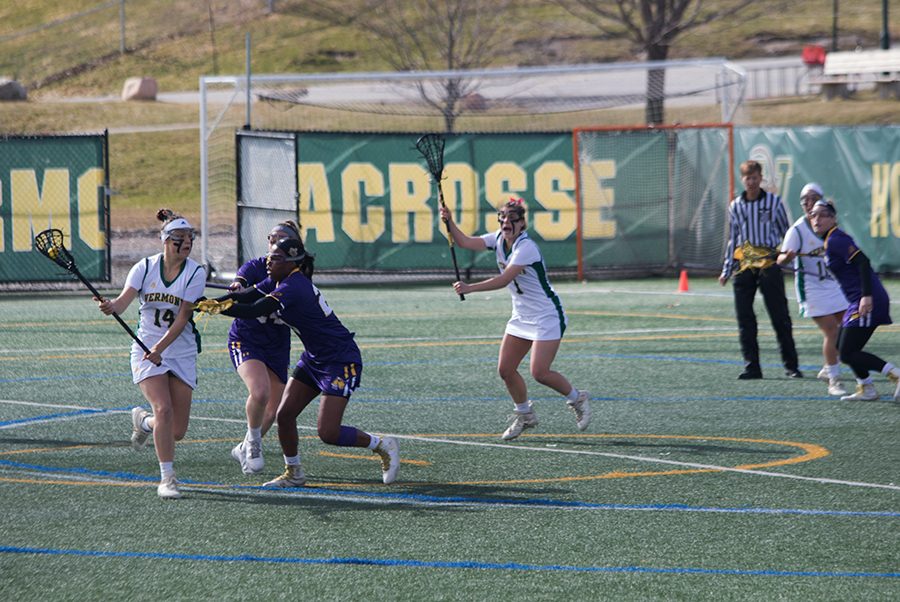 Women’s lacrosse failed to register their first conference win of the season, succumbing to a 17-8 loss to the University at Albany Apr. 4.

Albany remains undefeated in the conference.

“Our girls continued to fight, but it was a tough hole to dig ourselves out of,” head coach Sarah Dalton said.

Despite this, junior midfielder Elise Koehl scored another hat-trick during the game. Her first goal gave Vermont the short lived lead of 2-1.

After that, in the middle of the first period, Albany scored six goals within five minutes, making it hard for the Catamounts to recover.

“There were some moments where we weren’t taking care of the ball and [we were] giving Albany more opportunities,” Dalton said.

Koehl’s second goal was after the scoreless stretch, bringing the score to 11-4 at the half.

Based on the performance in the first half, the team made adjustments defensively and on the draw, as well as tried to keep up with Albany’s defense, which benefited the Catamounts in the second half, Dalton said.

However, Albany widened its lead in the second half as they hit another scoring streak, bringing their score up to 16 goals.

“Albany did a good job of controlling the draw and we just needed to get possession and take care of the ball,” Dalton said. “Initially we came out and were strong defensively, but they caught us in some lapses and took advantage of our mistakes.”

Senior attacker Elena McWright broke Albany’s scoring streak, bringing the score to 16-7. Within the last five minutes, Koehl scored the Catamounts’ last goal to give them a final score of eight goals.

Dalton acknowledged a key issue from this game that the program needs to work on to be successful in the future.

“Draw control is a huge part of the game and gaining possession of the ball is something that we have certainly lacked this game and even throughout the season.

“Even our shooting needs to be a lot better, we hit a lot of pipes and there are a lot of shots that we need to be capitalizing on,” Dalton said.”

The players could not be reached for comment after the game.