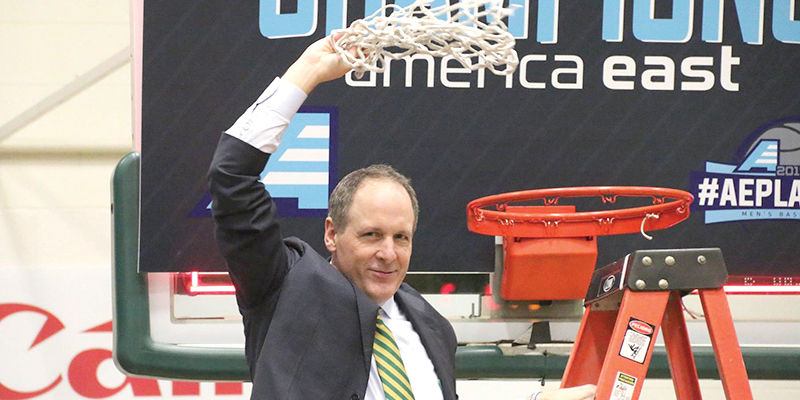 Hanging on the wall of John Becker’s office are pictures of his most memorable moments as head coach at UVM. There are dozens of them.

Becker took over as men’s basketball head coach in 2011. He won two America East championships and almost 70 percent of the games he has coached.

He is also a three-time coach of the year.

“He does not run the practice himself completely — he lets the coaches coach,” senior forward Drew Urquhart said.

Whenever the players are not as motivated, Becker takes it upon himself to get his players going, he said.

“On days when the speed and the motivation is not there, I insert drills that get our players moving,” Becker said. “I’ll also pull our captains to the side and tell them that we need more energy.

“They do a great job of conveying that message to the rest of the team.”

Sophomore forward Anthony Lamb said that Becker expects the best from his players.

“He understands that I can play well and that I can be a leader on the team,” Lamb said. “He accepts my mistakes, but also pushes me to do better each day.”

This season, Vermont went on an America East record winning streak. Becker’s focus was not on the streak, but on the next game, he said.

“We didn’t really talk about it,” Becker said. “Our expectation was to win the next game and plan the same way each game. We just had to block out the noise.”

As a head coach, Becker looks up to others in his position.

“I like guys like Brad Stevens, Jay Wright and Tony Bennett from Virginia,” Becker said. “They have really connected teams, and have a poise and presence to their coaching style that makes it about the players.

“I hope I emulate them in some way.”

Becker has been coaching basketball since 1994. He coached three different teams before becoming an assistant coach at UVM in 2008, and then landing the head coaching position in 2011.

Becker said that despite working with other coaches, he hasn’t had a mentor.

“I haven’t been handed anything, to a certain degree, and for most of my career I’ve worked for not a lot of money,” he said. “So, I’d say I made it here through my own hard work, instincts and common sense, rather than somebody else’s mentorship day-to-day.”

Becker is a scout. It is a challenge for him and any coach to look for players who can work hard and can fit in the system. His experience has helped, he said.

“Right now, I’m in my coaching prime,” Becker said. “I have a better sense of how kids can fit in our system here.”

“Coach Becker is a great recruiter,” Urquhart said. “One of the reasons that got me here was his laid-back personality type and how welcoming he is.”

Beyond being a head coach and a recruiter, Becker is also a husband and a father of two daughters. He credits his coaching success to fatherhood.

“I have a daughter who is a sophomore here, and it’s helped me really learn the perspective of these players who are all around the same age as her,” he said. “It has allowed me to bond with them closer than in the past.”