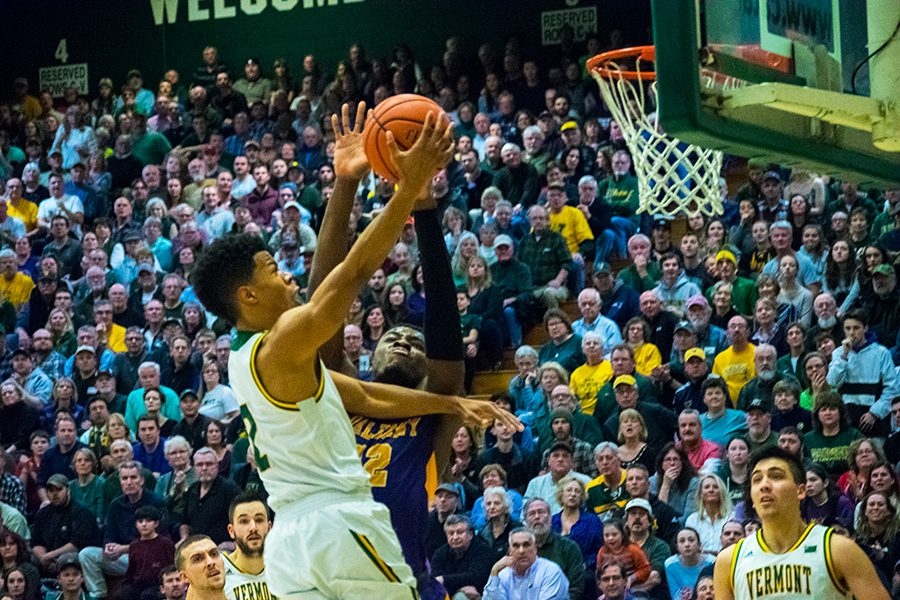 Senior Trae Bell-Haynes drives to the rim against Albany Jan. 24. The Catamounts are headed to the America East championship this weekend after beating the Seawolves Tuesday, March 6

Ten months after the America East matchup where the Cats were crowned conference champions, the University at Albany returned to the Tom Brennan Court.

The result was the same again. Vermont emerged victorious and extended their win-streak to 10 games.

Senior guard Trae Bell-Haynes sparked the team with 21 points and a dunk off of a steal highlighting the team’s 25-8 run at the end of the second half.

The game was part of the Rally Around Mental Health, an initiative founded by Bell-Haynes and senior swimmer Kelly Lennon to raise awareness for mental health issues among student-athletes, according to UVM athletics.

Away from the game itself, a scary scene took place at Patrick Gymnasium.

With 14:54 left in the first half, a fan collapsed and went into cardiac arrest. Both teams exited to the locker rooms, as medics rushed to the scene.

The fan was taken out on a stretcher and into an ambulance.

Both teams were struggling with offense for the first 9 minutes of the first half. Albany lead at that point 15-9.

The Cats then found a spark, and went on their 25-8 run to end the half. Ball Haynes had 13 of those 25 points, including a steal leading to a jam at the other end with 4:51 to play.

David Nichols of Albany grabbed himself an offensive rebound, and put up a layup, making it only a one possession game.

One possession later, redshirt junior guard Ernie Duncan sunk a three, giving the Cats a two possession lead. With 39 seconds left in the game, Everett Duncan sealed it. His brother, Ernie, dished it to him in the corner, and he hit his three, and extended the Cats win streak to six in a row.

“We are a blue collar team, and we pride ourselves on that. We’ve got a lot of talent offensively, but we are a hard-working defensive team,” forward Drew Urquhart said.

Head coach John Becker shared his thoughts on the emergency earlier in the game.

“It really puts things in perspective, and we are not as worried about ball screen coverage, we are talking about life and death,” he said.

“It lightened things a bit and made us realize that hey, we’re able to play basketball here tonight. Let’s go out and enjoy it.”

Everett Duncan had a huge game, securing the first double-double of his career.

“It’s a huge game for us to play against rival Albany,” Duncan said. “They always seem to be a conference championship contender, and this got us ready for big playoff games.”

The Cats look to extend their win streak to eleven as they head out to Binghamton for a conference matchup Wednesday Jan. 31.