Basketball team set for the season under new coach

After an offseason full of change and the addition of several newcomers, the Cats are ready to rebound from last year’s disappointing season.

With an entirely new coaching staff, led by new head coach Chris Day, the program looks to turn things around after four straight seasons of less than 10 wins, according to UVM athletics.

Day helped turn Division III Widener University, a team that had just one winning season in 17 seasons before he took over as head coach in 2000, into a respectable program at that level.

Now, Day gets the chance to do that at the Division I level.

“We built a program for Widener University, literally from twelve feet deep up,” he said.

“We got them a playoff-caliber team; now I get to do that [at the Division I level] here.” 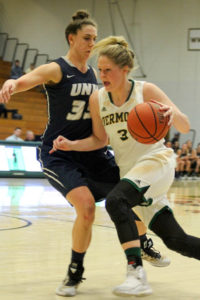 “[They’ve bought in] really quick, there’s no pushback, no ‘oh, we did it this way before,’” Day said.

“I was actually shocked at the take-charge approach to get things organized, and it really started with the leadership, our three captains.”

Smith said that this buying-in has also led to greater team chemistry.

“[At practice], people have this sense of urgency that they want to get better and they want to win,” Smith said.

One thing Day and his team wants to work on is turnovers.

“A lot of the philosophy that he’s shared with us is based on being confident when you have the ball in your hands,” Smith said.

“But also working on the fundamentals, it’s as simple as being able to pivot and make good passes.”

Day feels that the team’s big-gest strength is their versatility and post play.

“We have four kids that can shoot the [three-point shot] that are 6-foot-2,” he said.

“So that’s going to really open up things for the penetration.”

However Day feels his team still can improve from the three-point line.

The Catamounts shot 27.6 percent from behind the three point line last season, according to UVM athletics.

Day is most excited by the hope that his new system, which relies more on a motion offense, will fall into place.

“When you’re talking about what we’re taking over, to have that click, that’s going to be a pretty cool feeling,” he said.

“And we want it to click Nov. 5 against Saint Michael’s College.”

The improved team chemistry, along with the mix of experienced players and newcomers, have Smith excited for the season.

“I think that we have a lot of experienced players, but also our first-years are here and they’re talented,” Smith said.