Catamounts to host a NCAA game 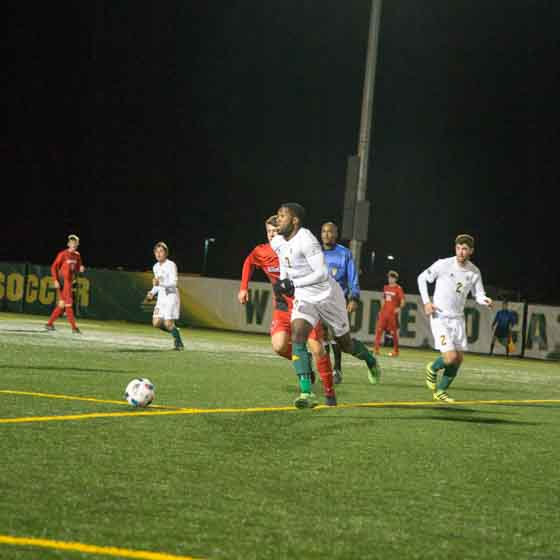 Despite not winning the America East conference tournament, men’s soccer is headed to the national tournament.

The NCAA tournament bracket was revealed Nov. 14. The Catamounts earned an at-large berth to the tournament, and will host Rider University Nov. 17 at Virtue Field.

The victor will travel to Charlottesville, Virginia to face seven-time champion University of Virginia cavaliers in the second round Nov. 20.

In the quarterfinals, the Catamounts hosted the sixth-seeded Binghamton University bearcats Nov. 5 at Virtue Field.

It looked like the run would end before it began after Binghamton went ahead in the 67th minute, but senior forward Bernard Yeboah equalized from a deflected shot with 3:04 to go in regulation.

Senior forward Brian Wright would then grab the winner in overtime, tapping home a rebound from a shot by senior forward Shane Haley.

“Binghamton did a nice job with the game plan, coming in and flustering, and upsetting, and disrupting what we were trying to do,” Cormier said.

Yeboah said he believed that the seniors on the team helped push the team.

The Catamounts then traveled to second-seeded University of Albany for the Nov. 9 conference semifinal, with a trip to the America East championship game on the line.

Albany  defended its home field, prevailing 2-0 on a rainy night. Albany forward Afonso Pinheiro opened the scoring in the 29th minute with a chip off first-year goalkeeper Aron Runarsson, and midfielder Carlos Clark would later add a goal for the great danes from just outside the 18-yard box.

Albany would go on to defeat University of Hartford 1-0 in the conference title game.

Following the defeat, the Catamounts needed to play the waiting game, something Cormier said he wanted to avoid.

“We don’t want to leave it up to a committee to decide what we’re going to do,” he said. “We’d love to earn the right to be there.”

The committee decided the Catamounts earned the right to be there, and the Cats now prepare for their second straight NCAA tournament — fifth overall. The Catamounts seek their first victory in the national tournament since they defeated Dartmouth College on penalties in 2007.

This year’s first round opponent, the Rider broncs, finished with a record of 13-3-3, and punched their ticket to the tournament by defeating Quinnipiac University 3-1 in the Metro Atlantic Athletic Conference title game.

No matter how the tournament goes, Cormier is optimistic about the future of the program, even with players like Wright and Yeboah graduating he said.

“I think that the program itself, beyond the seniors, is in good shape,” Cormier said. “This group has been so enjoyable. They’ve given so much to this program, and they’ve won so many games.”