With Major League Baseball in the thick of its playoffs, UVM’s very own club baseball team is in the middle of a play-off run themselves.

The Catamounts currently sit at the top of the Northwest Division within the New England Club Baseball Association standings.

Since joining the league in 2010, Vermont has made the NECBA playoffs every year, with championship game appearances in 2010 and 2014, according to NECBA records.

Following its quarterfinal loss to Bridgton Academy in 2015, UVM club baseball has had an overall record of 58-20, spanning a total of six seasons, according to NECBA records.

“Some of these guys could play Division 1 baseball,” head coach Jim Carter said. 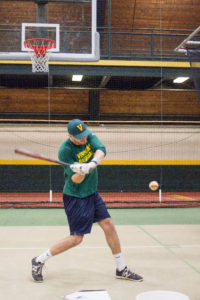 Carter said that the team as a whole has been doing exceptionally well both on offense and defense.

On Oct. 15, in a weekend series with the University of New Hampshire, the team suffered its first loss of the season 3-1, according to NECBA records.

“We probably should have won the first game and lost the second game,” Carter said.

The team bounced back in game two, with an 8-7 walk-off victory.

Going into the last inning, the Cats rallied to post six runs to secure the win.

“Beating a solid team like UNH in that kind of fashion says a lot about the determination and fight in our guys,” Connor said.

“We are playing good baseball, getting quality innings from everybody in the lineup, and are looking to carry that momentum with us as we move into playoffs.”

“Baseball is a proud tradition at UVM.”

The history of UVM baseball dates back to 1882, when the team was established as the University’s first varsity sport, according to UVM athletics.

Today, UVM baseball has only a club team.

The varsity team was eliminated Feb. 20, 2009, according to UVM athletics.

The team has enjoyed great success since it was established in 2010 under Carter as head coach, Carter said.

Known to his players as “Skip,” Carter has been a part of UVM baseball since 2000, starting as an assistant under former head coach Bill Currier.

“Skip has been around UVM baseball as long as I can remember,” said Connor, current team president.

Once the varsity program was cut in 2009, Friends of UVM Baseball was formed. This group of 18 individuals began the “Bring it Back” movement, hoping to gain public support in an effort to reestablish baseball as a varsity program at UVM.

Among these 18 individuals are Carter and associate athletic director Ed Hockenbury.

The group meets once a month to discuss actions to help further their cause, while also working to help the current club team with funding, Carter said.

“A reasonable number would be $2 million to $5 million,” he said when asked about the amount of money needed in order to establish a varsity pro- gram.

With a 9-1 record, Vermont has clinched a spot in the league’s playoffs, which begin Oct. 29.

As for the future of the program, with Hockenburry and new athletic director Jeff Schulman, Carter is optimistic about baseball returning as a varsity sport.

“I would say the door is open for discussion,” Carter said.