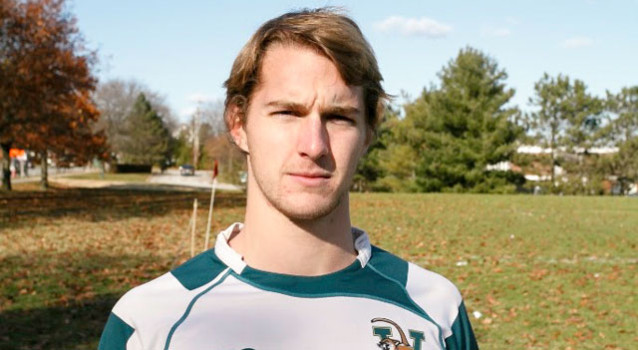 In the fall, as the sun is rising, the UVM men’s rugby team is headed to practice.

For junior Jackson McNally, this means wearing his signature green Crocs. A starter on the UVM club rugby team, McNally came to UVM in 2012 with no idea how to play the sport.

“My sister played at her college and raved about it,” McNally said.  “Once I expressed interest to a kid on my floor, he dragged me to a practice.”

In high school, McNally played varsity lacrosse and competed in track and field. After he attended a few practices and learned the basics of rugby, he said he was hooked.

“The rugby team is a great environment to grow as an athlete, no matter your skill level,” McNally said.  “It’s a tough and fast-paced sport, but all the guys strive for progression.”

According to McNally,  “when it comes to improving on the field and as a person I think Yoda nailed it, ‘Do or do not.  There is no try.’”

The club rugby team was founded in 1970, and competes in the New England Rugby Football Union, Division II. This past season, the club finished their regular season campaign with an 8-2 record.

The team advanced to the club rugby national tournament where they beat SUNY Oswego in the round of 16 and then lost to University of Wisconsin-Whitewater in the round of eight.

University of Wisconsin-Whitewater finished second in the tournament, which places the UVM squad sixth in the entire country, according to junior Spencer Reynolds.

“Sometimes people think that club sports are really casual, but rugby, as well as other clubs at UVM, are top-notch and in it to win.”  McNally said.

McNally plays wing, which is the player closest to the sideline.

Often, the wing is a speedy athlete and is positioned on the edge of the field.  Their job is to run the ball when it’s passed to them in order to gain yards or score points.

“Jackson started as this crazy athletic kid who couldn’t catch the ball.  Now he’s our starting wing and is scoring in most games,” said teammate, junior Jon Tolen.  “He is one of the highest-energy players we have, and that spreads around the team.”

McNally has started several trends for the rugby team this season, including their motto, “Can’t stop, won’t stop!”  McNally said, while laughing, that his next plan is to “make everyone buy lime green Crocs and wear them to practice and games.”

McNally, who is also a member of the UVM snowboarding team, says that sports help him stay healthy, motivated and having fun.

“Meeting many of the alumni from past seasons makes me proud I joined the team,”  McNally said.  “It’s taught me that success is made from focus, determination and commitment.’”