Demand for hockey tickets on the rise 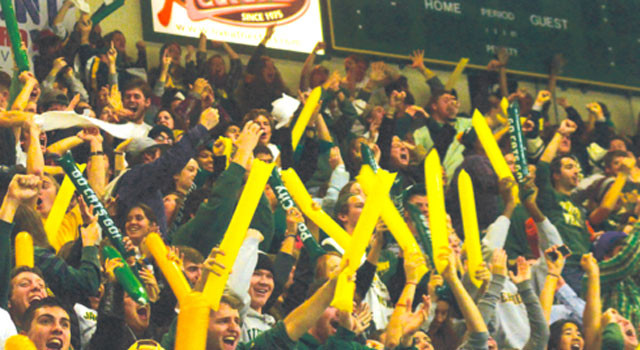 The UVM men’s hockey team is in the midst of one of their best seasons to date.

Although the Catamounts recently lost both games against the No. 3 Boston University, they have posted an impressive 15-9-2 record.

The Cats have gained nationwide attention thus far; they are currently ranked 17th in the nation, and sixth in the Hockey East standings.

With how well they have been doing, students have been giving UVM the best advantage a team can get — stands full of a home team crowd.

Hockey tickets go on sale every Monday at 9 a.m. for home games.

“This past week against BU, student tickets were sold out in a little over an hour and a half,” said Mike Cairns, assistant manager of the ticket office.

“The week before, against Northeastern, student tickets were sold out by noon on the first day.”

The ticket office has taken a few steps to alleviate this problem, such as creating a stand-by line for students without tickets.

Some students are looking at this demand for tickets from another angle, scalping tickets to make money.

With such a high demand for hockey tickets, most students don’t have a chance to get a ticket.

Sophomore Haley Grigel is one student who hasn’t had any luck.

“It’s kind of frustrating because I am a person who wants to see all the hockey games I possibly can, and I think a lot of kids are getting tickets to sell,” Grigel said.

“It’s ridiculous. I have class when the office opens, and for the past two weeks I’ve gone there and seen the game crossed out,” Larick said.

This prompts people to turn to alternative methods to obtain hockey tickets.

Other students believe that the ticket office could be doing more to ensure that as many students get tickets as possible.

“I think they should sell a certain number of tickets Monday through Wednesday, giving everyone at least a fighting chance,” Ridge said. “That could be a potential solution.”

Not everyone is against selling student tickets.

“It’s a real struggle when it comes to getting up early and getting the tickets, but if it’s a big game like BC or BU, I’ll try harder to be there when the office opens.  I ended up selling my ticket for $15 to a buddy, so I’m not against it at all,”  sophomore Justin Perry said, referring to last weekend’s games against the Terriers.

Whether students are buying tickets just to sell them or not, it doesn’t change the fact that Gutterson Fieldhouse has been packed for every home game.

The University of New Hampshire will come to Gutterson Fieldhouse Feb. 6-7 and then No. 18 Merrimack College on Feb. 20-21.

People like to see their home team win, so as long as the Catamounts continue to win, we will see a constant trend of sellout crowds.