UVM men’s hockey hosted the University of Michigan in the first-ever matchup between the two teams.

Michigan entered the game ranked No. 11 in the Oct. 24 edition of the U.S. College Hockey Online poll.

The Catamounts got the scoring going early.

Twenty-two seconds into the game, the visitors turned the puck over in the neutral zone and senior forward Tom Forgione made them pay.

Forgione’s shot from the slot off of a drop pass from first-year forward Derek Lodermeier beat Michigan goaltender Hayden Lavigne, giving Forgione his second goal of the season and putting the Catamounts up 1-0, a lead they would not relinquish. 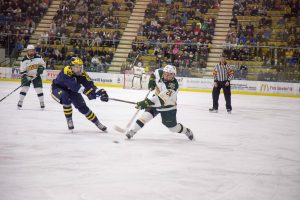 UVM doubled their lead to 2-0 midway through the period, as junior forward Kevin Irwin used a similar drop pass to set up first-year forward Matt Alvaro.

Alvaro then maneuvered around Michigan defender Cutler Martin and beat Lavigne from the edge of the left face-off circle for his first collegiate goal.

The icing on the cake would come midway through the third period.

With Michigan’s Griffin Luce serving a minor penalty for tripping, senior defender Rob Hamilton took a shot from the point that beat a screened Lavigne to extend the Catamount lead to 3-0.

The game would end with that scoreline.

The Catamounts outshot the Wolverines in all three periods: 16-8 in the first, 10-7 in the second and 16-6 in the third, according to UVM athletics.

Sneddon said he was impressed with the performance, especially the team’s constant pressure even when leading.

“I was very impressed with our performance tonight,” he said.

“I think the best part was we didn’t sit back at all, we learned from our opponent last week a little bit that a two-goal lead is a tough one to sit back on.”

Forgione said he believes that his goal provided a boost to the entire team.

“I think it definitely helped,” he said.

“I think that all of us really came out flying; we definitely used our speed early in the first, caused a turnover off the first dump-in and capitalized.”

Lekkas credited his success to his teammates.

“I give all the credit to them,” he said. “They bailed me out a lot tonight, they made a lot of blocked shots, our penalty kill was outstanding.”

The Catamounts went five for five on the penalty kill.

The Oct. 30 win was highlighted by the return of senior forwards Mario Puskarich and Brendan Bradley, senior defender Chris Muscoby and junior forward Anthony Petruzzelli from their suspensions.

The team will spend their next three games on the road, starting with a Nov. 4 matchup at the University of Massachusetts Lowell.