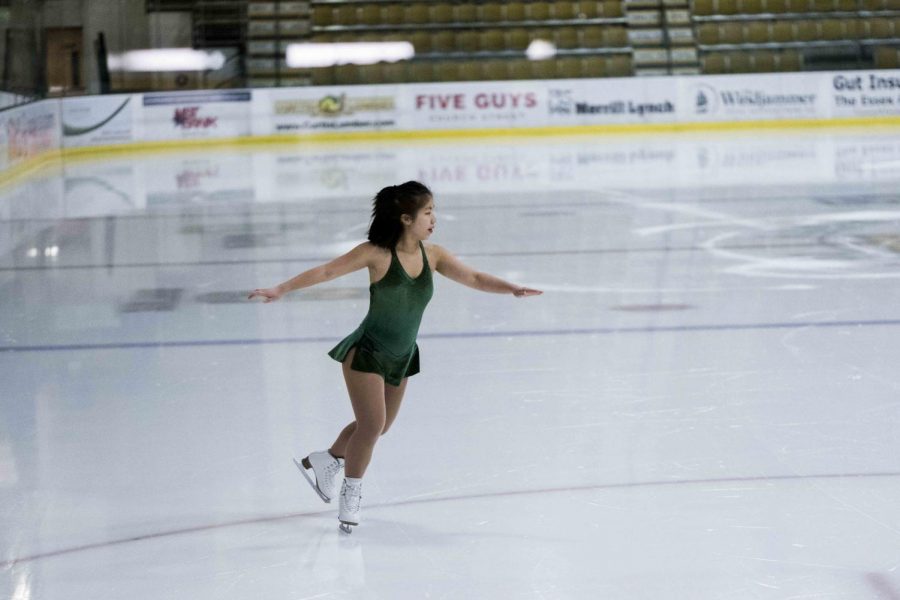 Sophomore Anitra Conover performs as part of the annual UVM Club Sports raffle, Nov.9. Skaters from all the club’s teams participated in the show.

At half-time each UVM hockey game, jerseys and pucks are replaced with glimmery leotards and patterned medleys of leaps and jumps.

Students might be familiar with the UVM Figure Skating Club from their elaborate mid-hockey game sets.

These sets are performed by the UVM Ice Cats, who are only one-third of the club as a whole.

The UVM Figure Skating Club brings together skaters for a variety of activities and exhibition opportunities on the ice.

In addition to the Ice Cats, there is the Freestyle Team and the Synchronized Skating Team, as well as recreational activities.

Senior Allison Beebe is the club’s treasurer and freestyle chair, as well as a member of the Ice Cats. Beebe said she started figure skating at the age of six.

“Most of us are just focused on competition,” Beebe said. “So we have to a little bit, like, switch our gears for the show.”

Every semester while the Ice Cats are busy cheering on UVM’s hockey team, the Freestyle Team and Synchro Team are busy competing in competitions all around the East Coast, Beebe said.

Both Freestyle and Synchro have coaches and private lessons availible for the public.

Junior Sara Klimek is a member of the club who utilizes its recreational opportunities.

Recreational time on Gutterson ice is provided a few times a week for any member of the club to improve their skills on their own time and at their own pace, Klimek said.

“We have a lot of members on the team with a varying level of experience and background in skating… everyone [is] super welcoming, which is awesome,” Klimek said.

Senior Stephanie O’Neill is the president of the Figure Skating Club.

She is also a co-captain of the Synchro Team, along with senior Kate Wettergreen.

O’Neill said she has been skating since the age of seven and performed a solo in the fall show.

A challenging aspect of these shows is all the event coordination that goes into them because they’re all student-run, O’Neill said.

In addition, reserving more time on the ice to practice and perform is difficult to navigate.

This is due to the popular demand from groups such as the UVM hockey teams and club Broomball, Beebe said.

During each semester the clubs organize a show. This semester’s was Nov. 9.

The show concluded with a finale featuring everyone on the ice in four large-scale numbers.

“It’s more of an exhibition event for all of our members to show what they’ve been working on so far this season,” Klimek said.

Despite the difficulties of assembling the show, Beebe said the outcome is rewarding.

O’Neill said that she was not originally planning on extending her figure skating career into college.

However, she said her teammates are what make the sport worth it.

“I’m really grateful for that,” Beebe said. “By itself, it’s just another sport. Having those people there makes it a community.”