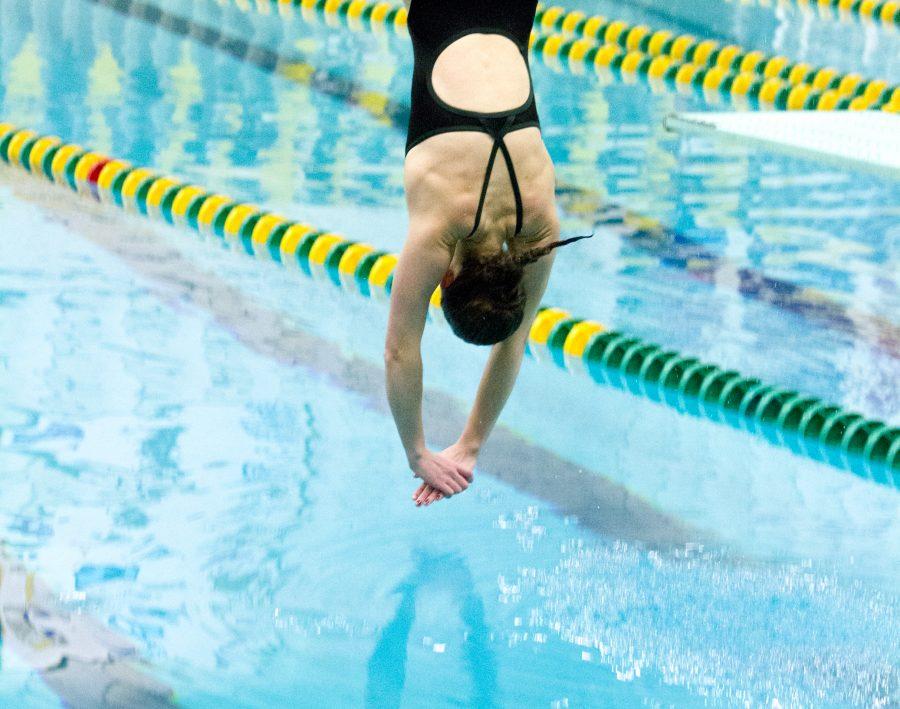 The America East Conference names one diver every year as their Outstanding Diver of the Year.

This year, UVM junior Maggie Preston received this honor.  Preston said she was “flattered and a little surprised” after winning the award. She said she did not expect to receive the award.

Preston set goals for herself in the beginning of the year to achieve a top three finish in both the 1-meter dive and the 3-meter dive, she said. She partially reached that goal.

At the competition Feb. 12-15, Preston won the three-meter title with 256.95 points.  She came in fourth in the one-meter event, according to UVM athletics.

Throughout the season she was successful in both events, winning on numerous occasions.

Both Preston and her coaches had set high goals for her, including to place in the top three overall for the divers.

“She really honed in on some little details that made her that much better,” swimming and diving head coach Gerry Cournoyer said.

Although Preston always shown a lot of potential, her coaches said her success is due to her desire to be better.

“Her discipline in practice and desire to be the best she can be pushes her to get better; every day she comes and holds her self to a standard that she wants to meet,” Cournoyer said.

Although the swimmers and divers compete individually, the team maintains comraderie.

“As a diving team, the motivation helps a lot, knowing the support of all the girls is there – we are always cheering each other on, especially through the more difficult dives,” Preston said.

Cournoyer said it is all part of the process, and at points they are supposed to feel tired and a little worn down so that they can progress.

Their practice schedule, consisting of several 6 a.m. lifts with afternoon practices during the week, is designed to help them reach their ultimate potential and perform at their highest ability in competitions, Cournoyer said.

Preston said she hopes that she can continue her success in her senior season.

For her  senior year, she looks to place in the top three in both of her diving events, as well as a new goal: to reach the NCAA tournament.

With a strong offseason as well as the potential of introducing a new dive to her constantly-evolving repertoire, she can reach this ultimate goal, Preston said.

Cournoyer said he is confident Preston can make this a reality if she continues working as hard as she does.

“She is a great and caring teammate who works extremely hard both athletically and academically, which has led her to great success,” Cournoyer said.