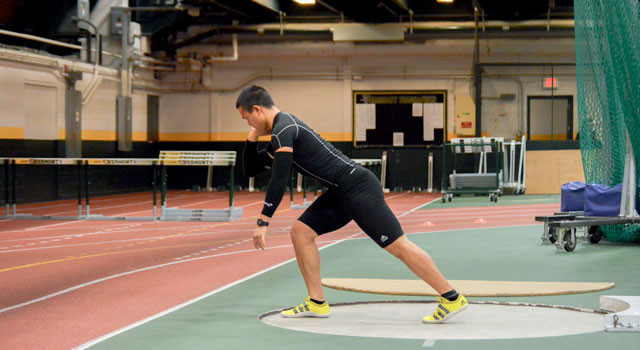 During the winter months, the UVM track and field team moves much of their practice and preparation to the warmth of indoor facilities.

Although there are many positive effects of this winter transition, the change produces unintended negative effects as well.

The indoor track allows the team to complete many of the same workouts they are able to do on the outdoor track, according to head coach Matthew Belfield.

“The facility inside is pretty conducive for much of what we do,” Belfield said.

Although the indoor track is smaller than the outdoor one, the same workouts can still be completed in the smaller setting.

In addition, the team makes use of the drop-down nets in the indoor track to practice field events such as the javelin throw. Belfield said the team simply puts tennis balls at the ends of the javelins for indoor use.

However, many of the longer distance runners still elect to run outdoors in the cold, Belfield said.

“As far as distance runners, most will run outside anyway,” he said. “Most would rather run a 10 mile run outside than run 100 laps on the indoor track.”

Senior Dave Connors, a middle distance runner, said indoor running can be “boring” and it’s personal preference that team members choose to continue their workouts outside.

“People try and get outside as often as they can,” Connors said.

Although Connors and Belfield are both glad for the facilities that UVM has, both agreed that the facilities are “a little behind,” as many of the schools that UVM competes against have 200 meter tracks.

However, the small indoor track has not held back the team from succeeding this year. In their first meet, the UVM track team swept the University of Hartford in both men and women’s events. Coach Belfield hopes to continue this success.

“I expect that we will have a good season in a strong conference,” Belfield said.