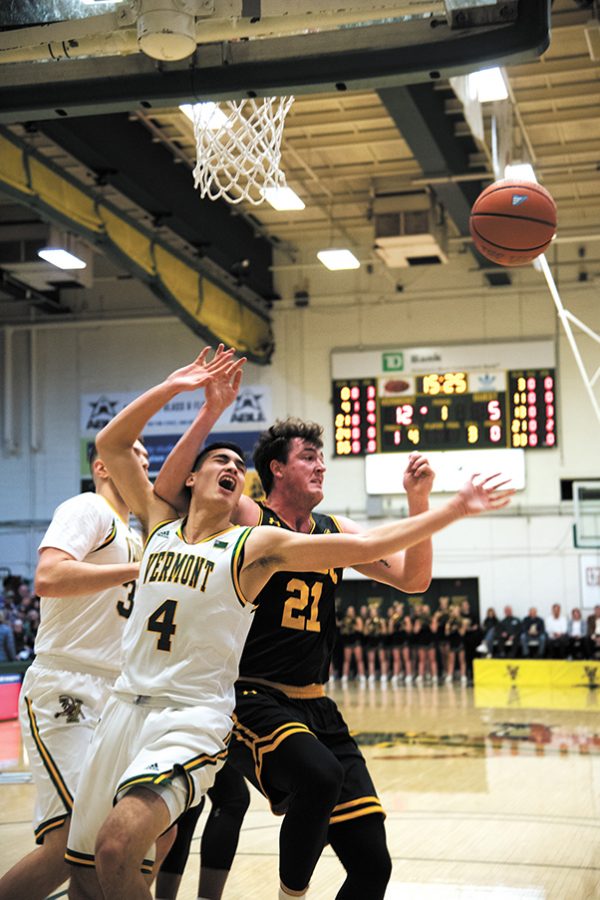 First-year Robin Duncan collides with a UMBC player while going up for a rebound in their 74-61 loss Jan. 25. This game was a rematch from the March 2018 conference title game where UMBC also won 65-62.

In front of an electrified Patrick Gym, the men’s basketball team played for their seventh straight win Wednesday night.

The UVM men’s basketball team lost 74-61 against the University of Maryland Baltimore County Jan. 23. This game was a rematch from the March 2018 conference title game where UMBC won 65-62, according to UVM athletics.

This was also the first conference loss of the season, as it broke UVM’s six game winning streak at home, according to UVM athletics.

Many fans left the game early in disappointment with the losing score.

However, the game began with an electric start, with three exciting three point shots by junior guard Everett Duncan.

“It was a big crowd and you could feel the pressure in the game, to learn from that, we’ll be ready for the next game on and off the court,” Everett Duncan said.

Everett Duncan scored 16 points in the game with ten rebounds. His brother, senior guard Ernie Duncan, scored 20 points, which was higher than anyone in the game.

Because of this game, Ernie Duncan is third on UVM’s all-time three pointer list, with 272 three pointers, according to UVM athletics.

After a 12 point lead in the first few minutes of the game, UMBC came back to tie 32-32 at the half.

The second half began with a 14-0 run by UMBC where Vermont was scoreless for the first 12 minutes.

“After the first couple minutes with our lead, from then on the game completely changed,” Ernie Duncan said. “They were playing way harder than us after those first four minutes and it showed.”

With eight minutes left in the game, UVM was only eight points behind. They lost this momentum when UMBC gained a 14 point lead during the rest of the game.

Head coach John Becker was shouting on the sidelines about many foul calls toward the end of the first half, and overall disappointed with his formerly surging team’s play.

“We’ve got to be able to play better than that, no matter who’s out or in,” Becker said. “We’re still a young team and looked like one tonight, we kind of got punched in the mouth.”

Junior forward Anthony Lamb was out of the game with a concussion, which caused all three Duncan brothers to start in the game.