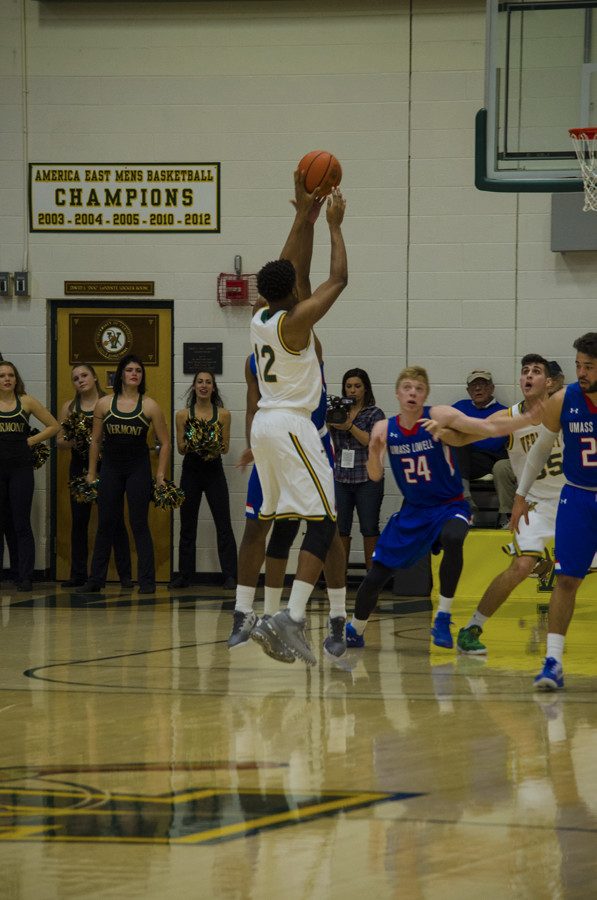 Redshirt senior forward Darren Payen pulls up for a jump shot against UMass Lowell Jan. 19. The Catamounts are on a 16- game winning streak as they head into the last games of the regular season.

Whether due to individual brilliance or impeccable team chemistry, the Vermont men’s basketball team is reaching new heights.

With every game, there seems to be a new broken record.

Their dominating 87-66 win over UMass Lowell sent the team into the history books, as they clinched a program-record 16th straight win. It was also the 14th straight conference win, also a program record.

With this win, Vermont gained at least a share of the America East Regular Season title, needing only one more win, or a Stony Brook University loss, to make the title their own.

Behind this success stands some of the most promising athletes in America East, if the numbers are anything to go by.

First-year forward Anthony Lamb was awarded the America East Rookie of the Year for the seventh time this season last week. Lamb became the first Catamount to collect seven of these awards, according to UVM athletics.

Lamb is not the only player breaking records this season. Senior guard Kurt Steidl became the first player in program history to with 1,000 points, 500 rebounds and 200 three-pointers, following Vermont’s win over UMass Lowell.

No team has ever managed to go 16-0 in conference play in America East, according to Feb. 14 Sports Illustrated article dedicated to Vermont’s incredible season.

Sports Illustrated also pointed out another impressive achievement: UVM holds the second-highest winning streak in the country with 16 wins, only behind Gonzaga University’s 26.

The winning streak, combined with the promising talent at Vermont, has attracted the attention of several “bracketologists.”

Head coach John Becker has also gathered attention for his team’s achievements. Becker was named as one of the top five mid-major coaches of the year, and was featured in a Mid Major Madness article.

One of the things he has done so well this season is sharing the responsibility among the team’s star players.

Steidl and senior guard Dre Wills are two of the most impressive defensive players, combining for 182 defensive rebounds and 58 steals.

Every player knows their role and does it well; the best example of this is redshirt senior Darren Payen.

The Milford, Conn. native has come off the bench every single game but one, and his impact has been very positive.

With only two games to go, Vermont has already secured a share of the America East regular season title, and appears in good shape to go undefeated.

The last team with such an achievement in the America East conference was the University of Delaware when they went 14-0 25 years ago, according to Sports Illustrated.

If Becker’s team keep this up, maybe the March Madness fever will catch Vermont too.