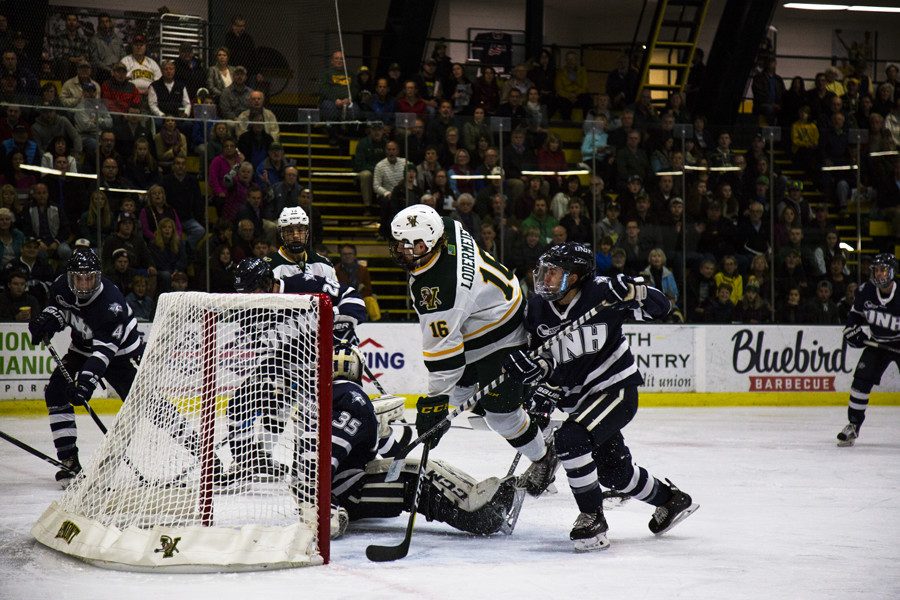 Sophomore forward Derek Lodermeier flies over the goalie for UNH in an attempt to score Oct. 28. The Catamounts would tie the Wildcats 4-4.

The Catamounts rallied from a two-goal deficit in the third period to tie the game in the last minute of regulation and skate away with a 4-4 tie.

Vermont dominated the first period, outshooting the visiting Wildcats 16-5. However, thanks to a strong effort from UNH goaltender Danny Tirone, the game remained scoreless heading into the second.

Seven minutes into the second period, the visitors opened the scoring on the power play, as Max Gildon found Michael McNicholas with a pass, who tapped the puck past sophomore goaltender Stefanos Lekkas to put UNH ahead 1-0.

Four minutes later, UVM evened it up at one apiece, as sophomore forward Matt Alvaro beat Tirone right after a faceoff.

UNH went back ahead three minutes later. Ara Nazarian was denied on a breakaway by Lekkas, but he stuck with the play and shoveled the puck past Lekkas to put UNH up 2-1.

In the last minute of the second period, first-year defenseman Christian Evers took a penalty for a hit after the whistle, setting up a UNH power play to open the third period.

The game busted wide open in the final frame. UVM struck first less than a minute into the period. Junior forward Craig Puffer beat Tirone from the left wing for a shorthanded, game-tying goal.

With Evers still in the box 37 seconds later, Nazarian beat Lekkas from close range to put UNH ahead 3-2 with a power play goal.

UVM cut the lead to one just under three minutes later. First-year forward Bryce Misley had his shot saved by Tirone, but sophomore defender Matt O’Donnell pounced on the rebound to make it a 4-3 game.

With just over two minutes to go, UNH’s Marcus Vela took a tripping penalty. UVM pulled Lekkas for the extra attacker, giving them a six on four advantage.

With thirty-four seconds to go, they cashed in. Evers took a shot from the point that Tirone saved, but O’Donnell buried the rebound again to tie the game at 4.

“Evers just took a shot from the point, we had six men on the ice and they had four, so someone was going to be open, and it happened to be me,” O’Donnell said. “I just found the puck sitting in the middle of the ice and put it in the back of the net.”

UVM had most of the looks in overtime, but were unable to find a winner.

“We played on our toes all night,” head coach Kevin Sneddon said. “I thought we carried momentum, one shift after another, for large stretches of the game, and that was the first time this season that I’d really seen that.”

UVM now travels to Hartford, Conn. to battle the University of Connecticut on Nov. 3 and Nov. 4.