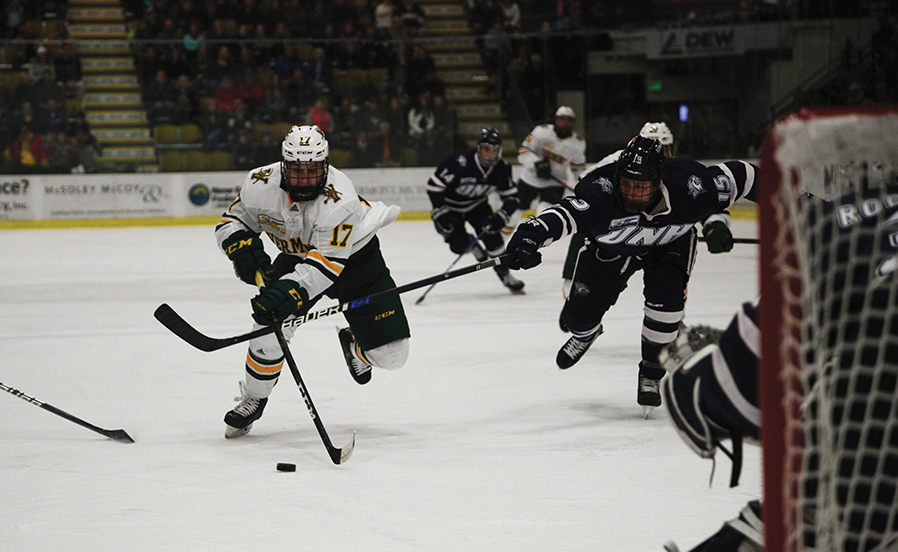 The UVM men’s hockey head coach is concerned about the team’s chances of entering the Hockey East Playoffs.

The Catamounts didn’t make it to the Hockey East Quarterfinals in 2018 because they lost to University of Massachusetts  Amherst 5-1, according to a March 2018 Burlington Free Press article.

Vermont skated to a 1-0 loss against the University of New Hampshire Wildcats Feb. 8 at Gutterson Fieldhouse.

“In all honesty, if it takes me at this point in the year to get our team fired up, we’re in a lot of trouble,” head coach Kevin Sneddon said. “I’ll say that point blank … right now.”

Prior to this game, Vermont was on a four-game winning streak, according to UVM athletics.

The Wildcats maintained possession during the majority of the first period.

“The defense are doing all the work because Vermont’s forwards can’t get control of the puck,” Danielsion said. “They’re going to need to pick it up.”

UNH scored the only goal of the game with four minutes remaining in the first period.

The puck hit the upper crossbar of Vermont’s net and and almost went in, but quickly bounced out.

The referees initially didn’t call the goal, but the Wildcat’s coaching staff quickly asked for a play review.

The referees watched the play on tape and announced that UNH’s puck had successfully crossed the goal line.

Burlington local Matt White said Vermont returned to the ice in the second period with an increased intensity.

“They’re definitely playing better than the beginning of the game, especially in terms of their shots,” he said.

During the second period, a penalty was called on UVM. However, Vermont was able to fend off the Wildcats offense.

Vermont out-shot their opponents 9-7 at the end of the second period.

Sophomore forward Bryce Misley put a shot past New Hampshire’s goalie within a minute of the third period, but an official called the Catamounts on a high-sticking penalty. This call discounted the goal.

Sneddon agreed with the official’s ruling of this play.

“It’s the right call,” he said. “We had a high stick. They didn’t have possession.”

The Wildcats maintained strong pressure against Vermont’s defense throughout the third period.

Sneddon said he questioned his team’s ability to play a solid three periods without getting tired.

“We have to play 60 minutes all out, our style, our identity and when we do, we’re pretty effective,” he said. “When we don’t, we’re not very good and that period … we weren’t very good.”

In the last seven minutes of play, sophomore forward Max Kaufman was awarded an opportunity to take a penalty shot after having his stick snapped by a UNH defenseman.

The crowd cheered louder than they had all night in anticipation of a goal. Kaufman failed to shoot past UNH’s goalie.

The Catamounts were able to redeem themselves after this game Feb. 9, when they beat UNH 4-1, according to UVM athletics.s

UVM’s next game will be against Northeastern University Feb. 15 in Boston.