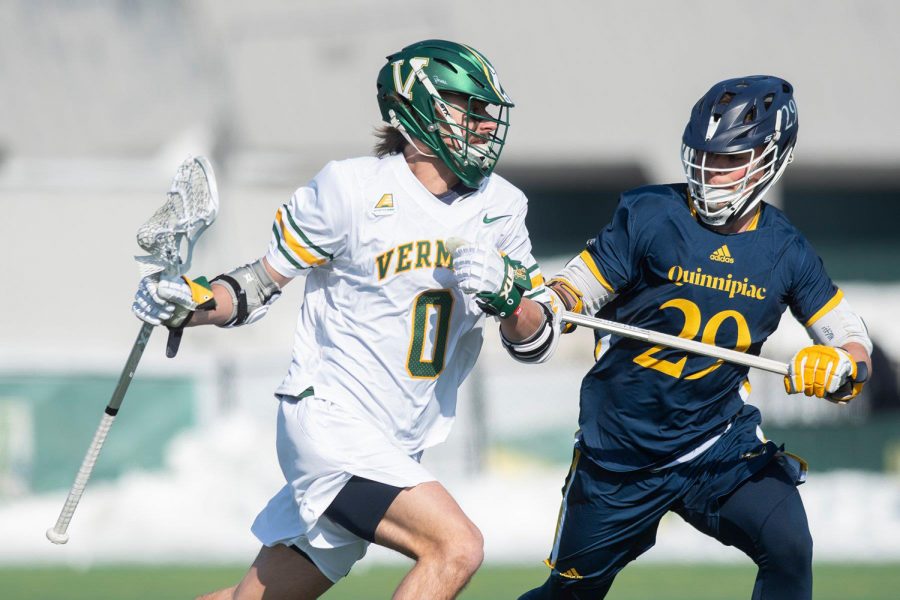 Parents of UVM’s men’s lacrosse team filled the stands, with lanyards of their son’s lacrosse stats around their necks, to cheer on the team in their first home game.

The Catamounts faced Quinnipiac University Feb. 22 in their first home game of the 2020 season and came out with a 16-7 win.

The team was led by head coach Chris Feifs, who is entering his fourth year as head coach at UVM, according to UVM athletics.

“I thought there were some really good individual performances,” Feifs said. “We wanted to start faster than we did last week, and I thought we did that.”

The team’s first game scheduled against Jacksonville University Feb. 8 was postponed, and they lost their game against College of the Holy Cross 10-9 Feb. 15, according to UVM athletics.

“Coming off of a loss, we felt like we really had to pay attention to the little details, and we were really intensive with our scout teams this week and trying to replicate what Quinnipiac was doing offensively and defensively,” Feifs said.

At just over a minute into the game, the Bobcats scored their first goal, according to the box score.

The Catamounts retaliated with four goals before Quinnipiac could score again and the first quarter ended 5-2 in UVM’s favor.

Senior midfielder Rob Hudson had a hattrick in the first quarter and all three of those goals were unassisted, according to the box score. Hudson scored two more goals in the third quarter.

“Overall I thought we played hard, and we were pretty consistent throughout the day,” Feifs said.

Quinnipiac sophomore midfielder Will Abbott scored five of the team’s seven goals and tied with Hudson for most goals scored in the game.

Sophomore midfielder Thomas McConvey also had a hattrick and made three assists in the game, according to the box score.

“For me, I just want to see these young guys have success,” Feifs said. “That’s what makes me the most happy.”

The team’s next three games will be at home starting against Merrimack College Feb. 29 following with Dartmouth College and University of Maryland, Baltimore County.