The Peter Baldwin Memorial Classic is a tournament hosted by UVM that is in its 25th season, the second under the name.

Prior to the 2015-16 season, UVM changed the name of the tournament to honor Peter Baldwin ‘68.

Baldwin was a standout of UVM soccer, helping the team win three Yankee Conference titles from 1965-1967 and ranking second all-time in scoring, according to UVM athletics.

Baldwin later returned as an assistant coach and was inducted into the UVM Hall of Fame in 1984, according to UVM athletics. 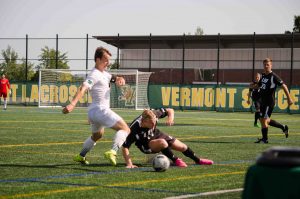 During the first half, the Catamounts failed to transition from defense into attack.

Despite this, they had the two best chances of the half, as senior forward Shane Haley just curled a shot wide of the far post in the 31st minute, and just before halftime, a corner kick by sophomore midfielder Clay Gattey was headed just wide by first-year defenseman Arnar Steinn Hansson.

The second half, however, was a different story.

In the 59th minute, Yeboah and senior forward Brian Wright broke free on a counter-attack.

Wright drifted wide, then played a pass in for Yeboah, who slotted the ball past Blackbirds goalkeeper Logan Keys to put the Catamounts up 1-0.

About 10 minutes later, the Catamounts struck again off a similar play.

Off a deflected free kick, Wright picked the ball up on the right side and sent in a ball for senior midfielder Charlie DeFeo inside the six- yard box. 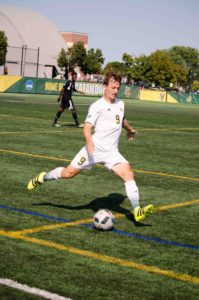 DeFeo chested the ball past Keys to extend the lead to 2-0.

In the 75th minute, Wright added a goal to his two assists.

He received a long ball over the top, evaded his defender and blasted one past Keys into the side netting, putting the Catamounts ahead 3-0.

First-year goalkeeper Aron Runarsson earned his second shutout of the season, while Wright is now up to fourteen points on the season, with Ye- boah now sitting on 12, according to UVM athletics.

“We got a pretty good talking to at half from Coach,” Wright said. “He just said we have to give more energy and they can’t control what we do.”

Cormier said he believes chemistry off the field has been key to the hot starts by Wright and Yeboah.

The two were named co-Most Valuable Players of the Peter Baldwin Memorial Classic following the game.

“They’re best friends off the field, they do everything together, and they’ve done it for three years. And going into their senior year, they set some pretty lofty goals together,” Cormier said.

“They just have a feel for where the other guy’s going to end up, and the runs they’re going to make, and the timing that they need, and it’s been pretty much unstoppable so far.”

Graduate student defender Loftur Eiriksson and senior midfielder Jackson Dayton, along with Wright and Yeboah, were named to the All-Tournament team. 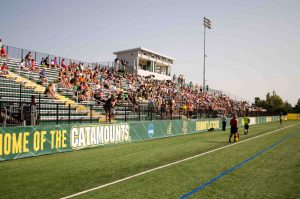 They return to Virtue Field Sept. 21 when they host the University of Massachusetts Amherst.