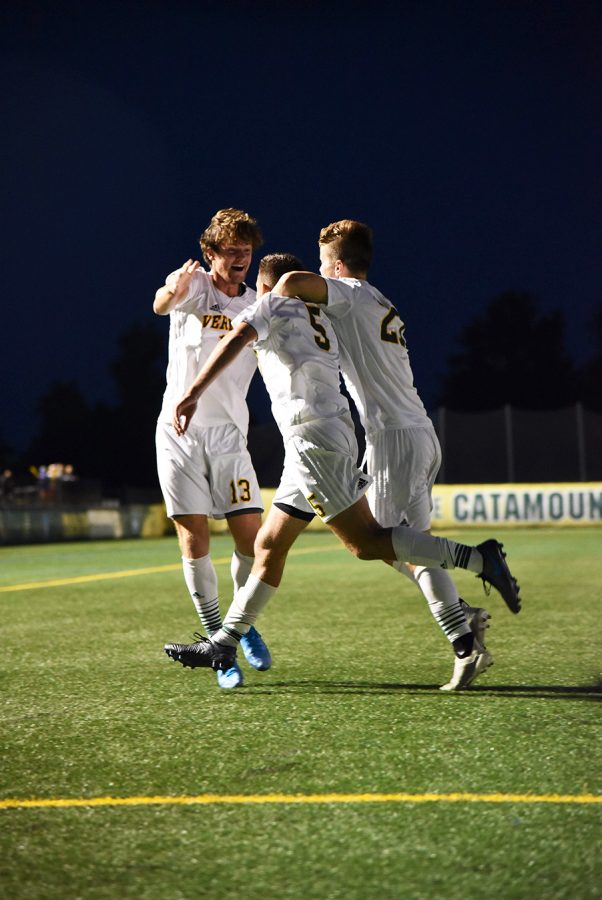 As UVM men’s soccer heads into their shot at the America East championship, the team has a sense of unfinished business, head coach Rob Dow said.

The team’s last match against now No. 1 seed University of New Hampshire was an awesome test, Dow said. The game ended in a 1-1 tie that brought the Cats into the No. 2 spot heading into the semifinals.

“There is certainly some unfinished business,” he said. “That unofficial playoff game against UNH was high level. I hate to say it, but it was a man’s game.”

UVM will face more than just a strong team; they’ll also be up against the elements. In the last 48 hours, Burlington has seen well over six inches of snow that covered Virtue Field and freezing temperatures, that will impact the match, Dow said.

But, the team has been practicing out on the field every day, including this past Monday, as snow began to coat the field, he said.

“We’ve got guys from Iceland and northern climate areas, lots of Vermonters who are pretty acclimated right now from the full week of training,” Dow said.

In the last month, Dow said the team has transformed into a well-playing and healthy team with a strong defense.

“We have most of the team healthy,” he said. “I love our defense. I said at the beginning of the year, this is going to be our staple, but it wasn’t. And now, it’s resurfaced…at the same time we’re scoring.”

Looking at their opponent, Hartford, Dow said his team will be playing a dangerous opponent that wants the game to be fast paced.

“They [Hartford] want the game to be at a fast tempo, a run and gun type game,” Dow said. “They have great athletes and you know, they’ve got scores from multiple positions.”

Heading into the semifinal match, with traces of snow left on the field, one thing is certain, Dow said.

“We’re not wearing white jerseys,” he said. “I can tell you that much.”