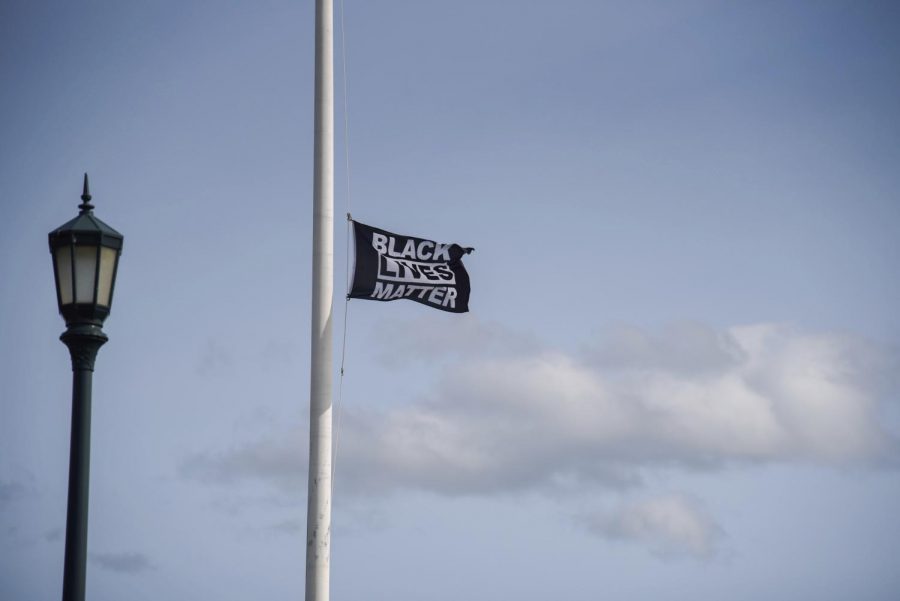 UVM Student-Athletes of Color Affinity Group raised the Black Lives Matter flag without permission outside Patrick Gym Sept. 12, rejecting the University's excuses for removing the flag from the Davis Center.

UVM Student-Athletes of Color Affinity Group raised the flag outside UVM’s Patrick Gym Saturday, Sept. 12 following weeks of controversy after the flag was taken down from the Davis Center pole in mid-August.

“We obviously disagree with the school’s policy, especially regarding the Black Lives Matter flag,” said Skyler Nash, a member of the UVM Men’s Basketball Team. “And we felt that it was our place as student athletes to really lead on that. We felt we were on the right side of the issue, so we decided to put the flag up ourselves.”

The implementation of an online implicit bias education and training module to be completed each semester by UVM students
A UVM-sponsored annual trip to The Legacy Museum in Montgomery with those participating in the trip being nominated
Athletic Department funding the Athletics Inclusive Excellence Committee and creating a new position to be an ally/mentor to student-athletes of color
Athletic Department positions must include at least one interview with a person of color and three SAOC members must be included in the interview process of all candidates
University collaboration with the Mosaic Center and Office of the Vice President for Diversity, Equity, and Inclusion to develop and implement annual faculty training on integrating conversations on diversity into the existing curriculum
Calling on UVM to transfer control of the two Patrick Gymnasium flagpoles to the Athletic Department

Nash, the president of UVM SAOC, posted a video to Twitter on Saturday evening which featured the BLM flag going onto a post in front of the gymnasium.

The Mosaic Center for Students of Color doesn’t need to be reminded that Black Lives Matter. If we can’t fly a flag at the Davis Center, as athletes, we will make sure anyone who wants to enjoy our sports can’t ignore our values. #BlackLivesMatter pic.twitter.com/KCA41cuNVD

“I’m hoping we can convince them that it should stay up,” Nash said in a Sept. 14 interview. “And I’m hoping the school will take further actions to continue to demonstrate that black lives matter to the University of Vermont.”

“We have had a number of meaningful conversations around the racial challenges the world faces, and we remain committed to continue our conversation to achieve our shared goals,” she stated.

The flag originally flew outside of the Davis Center at the beginning of August. However, it was ultimately taken down from its Davis Center flagpole.

Nash says he recognizes the potential reasons to have a flag policy, but thinks there needs to be certain exceptions.

“When the University applies this flag policy to the Black Lives Matter flag, there is the potential for creating some harmful false equivalencies between that flag and those of other political movements or even hate groups,” Nash said.

Following the flag’s removal from the Davis Center, UVM President Suresh Garimella announced in an Aug. 28 email that the Black Lives Matter Flag would be permanently placed in the Mosaic Center for Students of Color.

“The people in the Mosaic Center don’t need the flag to showcase that their values align with Black lives,” Nash said. “That’s the job of the University as a whole and it’s certainly our position in athletics that we align for the movement for black lives and want to make that clear to anybody who comes into the gym.”

Nash feels that the letter of demands has been received well by students, faculty and staff, including Prelock and the Athletic Department.

Jeff Schulman, the Director of Athletics, released the following statement in regards to the Black Lives Matter flag being hung outside of the gym and the accompanying letter released:

“[The letter] reinforces how deeply our student-athletes care about racial equity and fighting injustice in all its forms. I share these values and appreciate the ongoing, positive conversations that I’ve had with SAOC leaders,” he stated. “I look forward to continuing the dialogue with them about how to best express our Athletic Department values of justice, equity, diversity, inclusion and respect.”

Nash said he was happy with how his conversations with Prelock went and is hoping to meet again with her, Garimella and the Athletic Department going forward.

“The overwhelming reaction among students has been positive. It’s been really, really encouraging to see the way that people have stood by that letter and the flag,” Nash said. “We’re going to be leaders on this issue, not just on campus but also in the state.”

Ella Ruehsen contributed to the reporting for this story.