UVM advances in the playoffs 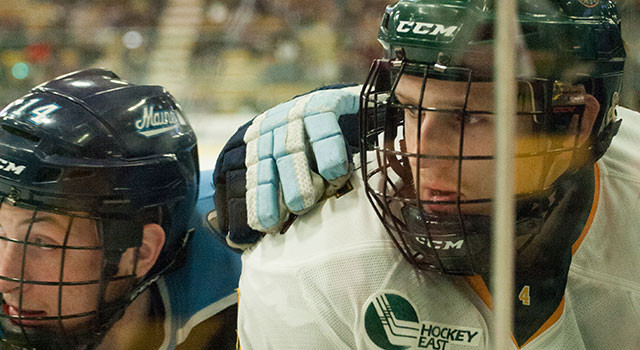 The men’s ice hockey team faced annihilation at the hands of the University of Maine Black Bears in the first round of the Hockey East tournament last weekend.

With just over four minutes left in overtime, first-year Anthony Petruzzelli picked up a loose puck behind the Maine net and sent a backhand pass out into the slot.

“Petruzzelli got it behind the net and kind of gave a no-look pass and no one found me and I just tried to shoot it through the net, as hard as I could,” Turk said.

UVM faced Maine four times this year prior to the playoff series, winning all four games by a combined score of 18 to 8. However,  head coach Kevin Sneddon recognized the challenge going into the weekend.

“It’s hard to score goals this time of year, everybody is playing such great team defense,” Sneddon said. “We’re excited to host a playoff series next weekend.”

Both senior captain Mike Paliotta as well as Sneddon believed this time around would not be as easy as the others.

“They are not the same team and neither are we,” they both said prior to the weekend’s series, acknowledging Maine’s performance.

The only realistic route left for UVM to return to the Frozen Four lies in winning the Hockey East championship and earning an automatic bid due to their poor record versus strong opponents.

Game one of the series started with a goal from Maine before UVM evened the score.

The Cats got goals from senior Alexx Privitera and sophomore Jarrid Privitera, as well as sophomores Brendan Bradley and Brady Shaw. The Cats took game one by a final score of 4-2.

Game two opened with a similar slow start from Vermont resulting in Maine’s Cedric Lacroix scoring only 55 seconds into the first period.

Senior Colin Markison tied the game later in the period with a power play goal, and Bradley also continued his scoring streak with a goal of his own, but the Cats would fall short.

The final was 4-2 again, this time in favor of the Black Bears.

“You can’t chase the game all the time and feel like ‘hey we’re going to come back,’ Sneddon said. “We’re going to make mistakes but the goals they scored were nothing more than them wanting it more.”

The Cats would respond for game three, going up 1-0 in the first period of Sunday night’s elimination game.

First-year Kevin Irwin fired a tough angle shot high glove side in the second period to give the Cats a 2-0 lead going into the third.

Maine cut the deficit in half early in the third period and with less than five minutes to go scored again, evening the score for the Black Bears.

“Bounces happen like that, but we responded well and in overtime we played to win and that’s the bottom line,” senior defenseman and captain Mike Paliotta said.

The overtime period went back and forth.

Sophomore Michael Santaguida started all three games, making 84 saves throughout the weekend, according to UVM athletics.

The Catamounts advance to the next round against Boston College in Chestnut Hill, Massachusetts. UVM went 1-1 against BC this year.

The two contests against the Eagles were decided by one goal. “I think we’re going to be a tough team to play against.”  Sneddon said. “As I told them, I can still picture them holding the trophy.” 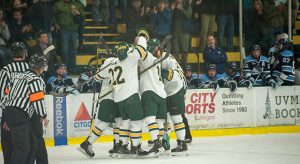