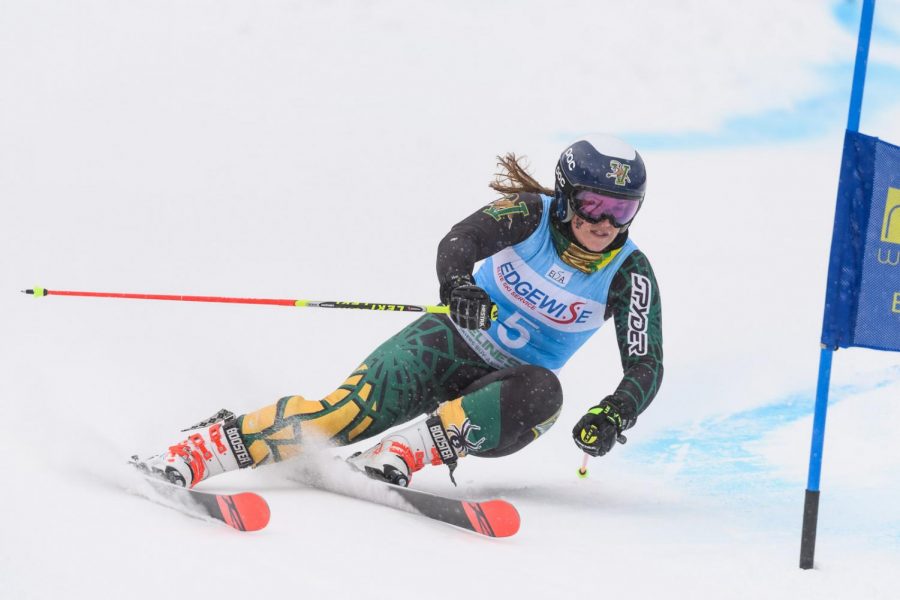 Former student Paula Moltzan skis for UVM during her 2019 season. Moltzan has been on the U.S. Ski team since 2012.

Not many UVM students can say that they’ve competed in the World Cup, but Paula Moltzan can.

“When I was two, I started skiing,” Moltzan said. “Not until I was six or seven did I know what I wanted to do with it.”

“Before I went to UVM, I took four years off in between high school and college, and I skied for the U.S. then, and I’ve skied for the UVM team for the last three years,” Moltzan said.

The World Cup is an international circuit of ski racing competitions. Skiers race for the best time in four disciplines: downhill, super-G, slalom and giant slalom.

“The U.S. team is not competing for your team as a whole, you’re competing just as individuals, so it can get a little complicated,” Moltzan said.

When Moltzan first started skiing at UVM, Bill Reichelt, director of skiing and head alpine coach, was beginning his 17th year with the UVM ski program, according to UVM Athletics.

“She was kind of making the adjustment to college skiing,” Reichelt said. “Realizing that she didn’t have to win the race by two seconds, like winning by a tenth was enough to score the same amount of points.”

During this adjustment, Moltzan became the fifth UVM female to win the NCAA slalom title. She was the first first-year to win the title since 1986, according to the U.S. Ski and Snowboard website.

“Between Moltzan and Laurence St. Germain, those two were kind of coming and going, they were doing the school thing plus the World Cup,” Reichelt said.

Laurence St. Germain ‘19 began skiing for UVM in 2015, according to UVM athletics.

St. Germain currently skis for the Canadian ski team, and competed at the World Cup race Nov. 29 in Killington, Vermont, according to the Alpine Canada website.

“With those two not around, it added a little pressure to the women that were still here,” Reichelt said. “When they were here, I think it helped the other women be a little more relaxed and it helped their results as well.”

Moltzan has achieved multiple career honors including NCAA First Team All-American and NCAA Individual National Champion, both for slalom, according to UVM athletics.

“It happens in the middle of January,” she said. “It’s a night race, so kind of comparable to a night football game, with a bunch of stadium lights going up a ski hill.”

In the 2015 World Cup, Moltzan scored her first points in Flachau, and then went on to become the first American woman to win a slalom gold medal, according to the U.S. Ski and Snowboard website.

This World Cup season, Moltzan finished 23rd in the slalom race Jan. 14 at Flachau, according to the FIS Ski website.

“Competing in the World Cup is always a lot of pressure and a lot of work, but I have a lot of fun doing it,” Moltzan said.

When Moltzan races in the World Cup, she represents the University by wearing a black helmet with a UVM decal on it, according to an article by Thomas Weaver, a UVM spokesperson.

“She was not on the [U.S.]team yet so she didn’t have a team jacket, so she was wearing our team jacket,” Reichelt said. “That was pretty cool to see our team coat on international television.”

Moltzan returned to Vermont to ski in the 2020 UVM Ski Carnival Jan. 24-25 in Stowe, Vermont, according to UVM athletics.

Moltzan placed first in her race, according to the Eastern Intercollegiate Ski Association website.