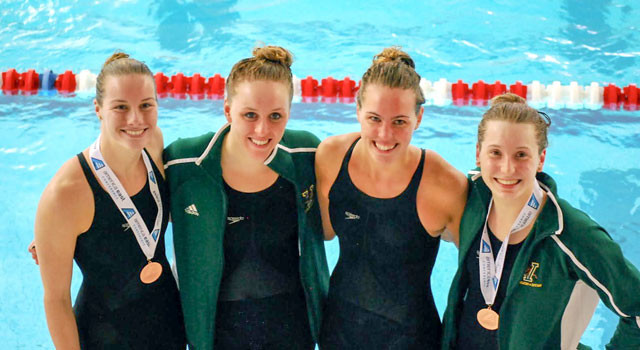 The event concluded on Feb. 15, and the Catamounts came home with a program record of 662 points.

Senior Katie Adams, one of the team’s captains, said “This season’s team was by far the most focused and driven.”

Of the 30 athletes on the team, 14 are going on to the next championship meet, the Eastern College Athletic Conference at the University of Pittsburgh.

The team’s head coach, Gerry Cournoyer, said he agreed that the team has had a very strong year.

Junior Maggie Preston won the 3-meter diving event, which was the first time UVM has ever had a diver win an event at the conference meet.

“That was a pretty exciting thing for our diving program,” Cournoyer said.

Preston was the first UVM diver named Most Outstanding Diver at the America East Championships. Last week, she was named the ECAC Division I New England Diver of the Week, as well as the TD Bank Student-Athlete of the Week.

“We had some pretty strong swimmers across the board,” he said.

The team practices about 20 hours a week, Cournoyer said.

“They make a lot of sacrifices by putting their athletic and academic careers first, and they put each other first.  They’re able to support each other.  This is a direct result of the girls before them,” Cournoyer said.

The team “culture,” has developed over a series of years with emphasis on excellence and dedication, Cournoyer said.

“The girls make the right choices in the pool, as well as out of the pool, which is really important,” he said.

“We knew what we wanted to accomplish from day one, and we constantly reminded ourselves of those goals on a daily basis. That pushed us to work harder, ” said team captain Adams.

The team’s motivation has certainly paid off, according to Adams.  She said that the team practiced in Florida during winter break, where they “developed stronger bonds.”

“By the end of the season, everyone had each other figured out; we knew our roles as team members, and we became our biggest supporters,” Adams said.